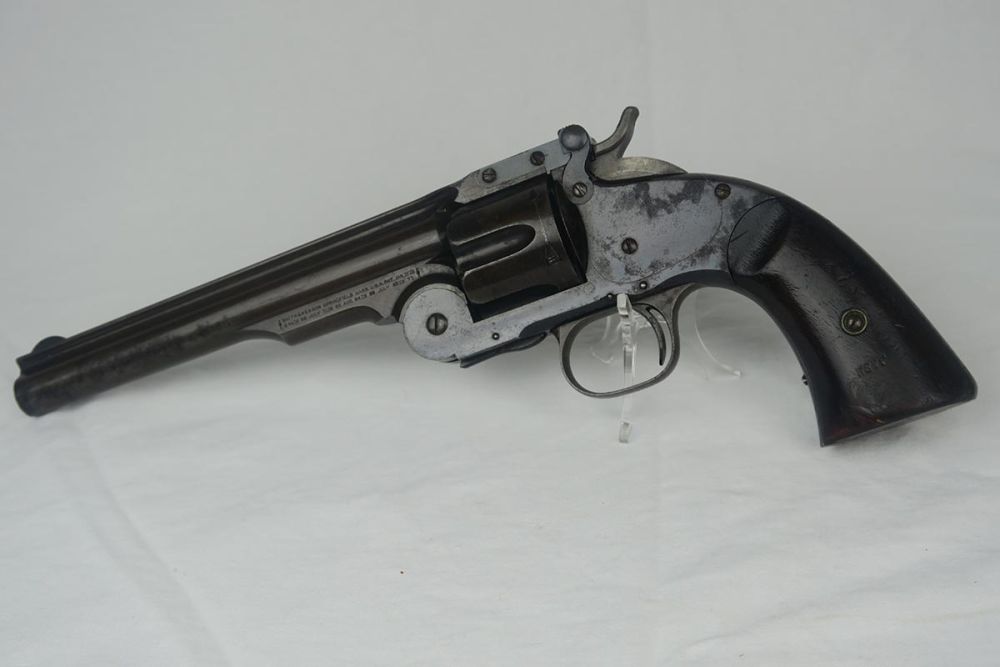 10/6/17 - This is a rare Smith & Wesson Schofield 2nd model revolver, manufactured in 1877, with cartouche on both grip panels, US property mark on frame and police arsenal numbering on back strap.  The left grip has a "DAL" (Lt. David A Lyle) Inspectors cartouche under "1877" and the right grip is stamped with the "CW" (Charles Woodman) Sub-Inspectors initials.  This revolver is one of approximately 300 that were issued from the Benicia Arsenal to the San Francisco Committee of Safety during the labor riots and civil unrest of 1877-78. The riots and unrest were a result of the great railroad strikes of 1877 that sprung up in many large cities across the United States. Records do exist of these 300 revolvers being issued however, no records exist of them being returned and it is popular belief that once the riots were put down all the revolvers were obtained by the California militia. The top of the back strap features the hand stamped SFPD marking "188".  All numbered parts are matching.  There is light freckling in a few spots and patina throughout.  The bore and action are excellent, however.  Minty bore.

For more historical context, I have attached some information I found online. The words are not my own:

"Another interesting chapter in the story of the Smith & Wesson Schofield occurred in the San Francisco area during 1877 and 1878. In 1873, an economic depression had afflicted most of Europe and had migrated to American shores. While the combination of factors creating the crisis were multidimensional, one that directly affected the American West was the Coinage Act of 1873, the decision to move from a gold-silver monetary system to the gold standard. This ended the minting of silver coins in America, which had a disastrous effect on the silver mines of the west, as the value of silver plummeted with the government no longer buying it for use in coins. Additionally, the economic collapse had started in the major cities of the east, primarily New York, Boston and Chicago, and the lack of jobs and economic opportunity had caused many Americans to move west. The pressures placed on western US economies by the precipitous drop in silver value and the increased population resulted in widespread unemployment, particularly in urban centers like San Francisco. The end result was that thousands of unemployed and disenchanted people struggling to survive and in search of hope. Many found a hopeful message with the Workingman’s Party of the United States, a socialist labor movement. On July 23, 1877, some 8,000 members and interested parties gathered near the San Francisco City Hall for a “meeting”, which by the end of the night had devolved into a massive riot that lasted well into the next day. One of the points of tension, and a classic cry of those who would incite violence during hard economic times, was that the problem was the “foreigners”. Little thought was given to the fact that nearly all of those who gathered for this meeting were immigrants themselves who had only been in the United States for one or two generations. The chosen scapegoat were the Chinese laborers, whose massive influx over the last decade had resulted in lower wages and fewer job opportunities for newly arrived easterners. The cry of “Chinamen must go!” echoed through the night and would become the rallying cry for the Workingman’s Party, which would be the genesis of the Socialist Labor Party of America. The riots eventually petered out after heroic efforts by San Francisco Police, supported by the state militia which was called out as well. Soon thereafter a group of concerned citizens known somewhat derisively as the “Pick Axe Brigade” was formed to assist with the suppression of the violence and to discourage further rioting. However, it would take more than a year before the constant threat of possible riots would pass, and much longer before the racial tension would moderate. During this time, the San Francisco Police determined that they were woefully ill-prepared and under equipped to deal with such mass civil unrest. To that end some three hundred US army Schofield revolvers (both first and second models) were issued to the San Francisco Police Force during 1877 and 1878. According to research by Charles Pate (see his Man At Arms article on the subject), the guns were issued from the Benicia Arsenal (about 35 miles north-east of San Francisco). Since 1851, Benicia had been the primary US arsenal on the west coast and would remain so through the mid-1960s. According to Pate’s research, all the revolvers issued to the SFPD from the Arsenal were stamped with large, individual inventory numbers on the backstrap, behind the hammer. Although there are records of the guns being issued, there is no evidence that they were ever returned it seems likely that since the guns were already falling out of favor and most were soon to be sold off as surplus, that the US Army simply did not put any effort into retrieving the three hundred revolvers. The guns no doubt remained in service with the SFPD until they were obsolete, and likely replaced with double action .38 caliber revolvers around the turn-of-the-century. Today, they remain an interesting footnote in the story of the Smith & Wesson Schofield revolver, and make a particularly scarce and desirable variation for the advanced Smith & Wesson collector."