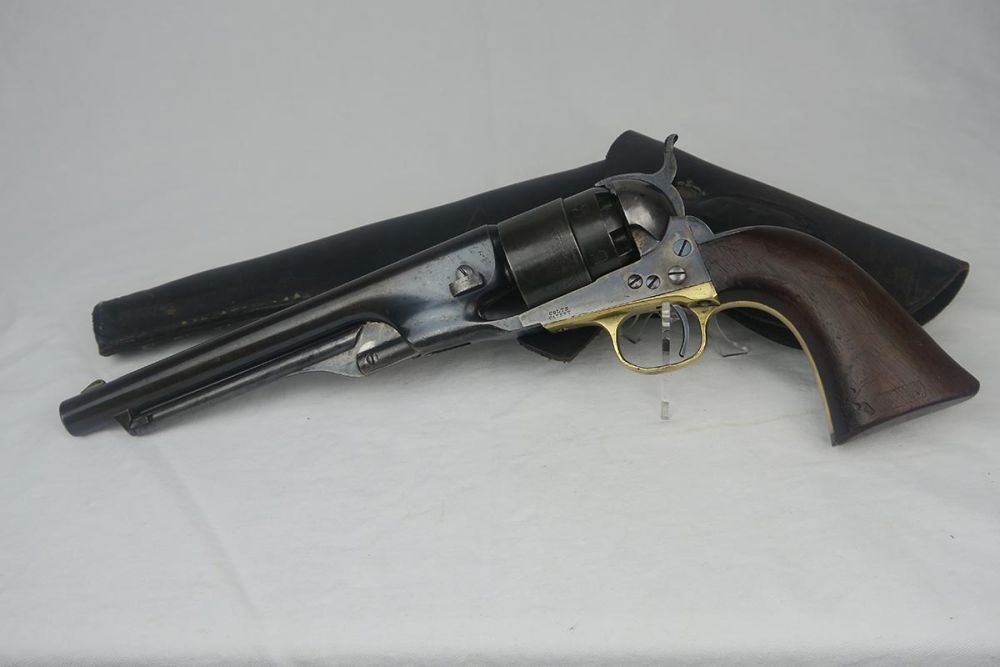 8/11/17 - This is an all-matching and original Colt Army Model 1860 with original holster.  It is a muzzle-loaded cap & ball revolver in single-action, chambered in .44 caliber.  All numbered parts are matching on this revolver.  The left grip panel has a visible cartouche.  The cylinder has a ship/naval scene still visible.  There is a decent amount of browning on the barrel but no pitting on this revolver.  The frame is modified slightly to be adapted for use in a shoulder holster - this is scene in the two small knobs that extend off either side of the frame above the trigger.  Proper mechanical action and timing.  Bore needs a good cleaning but has strong rifling.

The Colt 1860 Army uses the same size frame as the .36 caliber 1851 Navy revolver. The frame is relieved to allow the use of a rebated cylinder that enables the Army to be chambered in .44 caliber. The barrel on the 1860 Army has a forcing cone that is visibly shorter than that of the 1851 Navy, allowing the Army revolver to have a longer cylinder. Another distinguishing feature of the Colt 1860 Army, first introduced on the Colt 1855 Sidehammer Revolver, is the "creeping" loading lever. More than 200,000 were manufactured from 1860 through 1873. Colt's biggest customer was the US Government with no less than 129,730 units being purchased and issued to the troops. The weapon was a single-action, six-shot weapon accurate up to 75 to 100 yards, where the fixed sights were typically set when manufactured. The rear sight was a notch in the hammer, only usable when the revolver was fully cocked. The Colt .44-caliber “Army" Model was the most widely used revolver of the Civil War. It had a six-shot, rotating cylinder, and fired a 0.454-inch-diameter (11.5 mm) round spherical lead ball, or a conical-tipped bullet, typically propelled by a 30-grain charge of black powder, which was ignited by a small copper percussion cap that contained a volatile charge of fulminate of mercury (a substance that explodes upon being subjected to a sharp impact). The percussion cap, when struck by the hammer, ignited the powder charge. When fired, balls had a muzzle velocity of about 900 feet per second (274 meters/second), although this depended on how much powder it was loaded with.