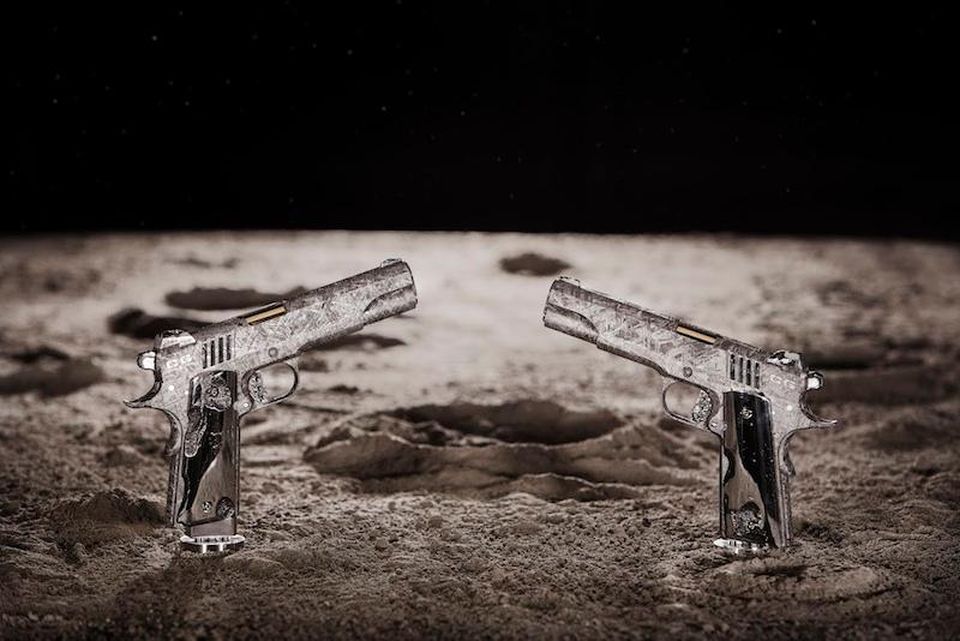 It simply means guns are not all the same.  They might function similarly, but time has shown that the true difference lies in factors like craftsmanship, history, past owners, quality or rarity of materials used, and so on. Based on any or all of these, the value of a gun can rise or fall significantly. An off-the-shelf gun can hardly compare in value to a piece once owned or used by figures like George Washington and Teddy Roosevelt. Some firearms are also more precise than others, rare or custom made. They are better regarded as one-offs or collectibles.

Collectors across the world who know their firearms and are not afraid to purchase such highly-priced items may already have one or two of these unique guns. If you are wondering what the most expensive guns are, you are in for a treat. Continue reading as we go through this perfectly curated list, filled with the reasons why each piece is special, and a good idea of their monetary values.

Beretta is a popular brand with a reputation for making high-quality guns. Most Beretta semi-auto and double-barreled are recognized worldwide and even used in skeet and trap by Olympic champions. The Imperiale Montecarlo is sleek and powerful. It’s a top of the line side-by-side priced at $106,800. It is one of those rare expensive pieces that get their value from their outstanding craftsmanship, amazing engraving, performance, and brand name. 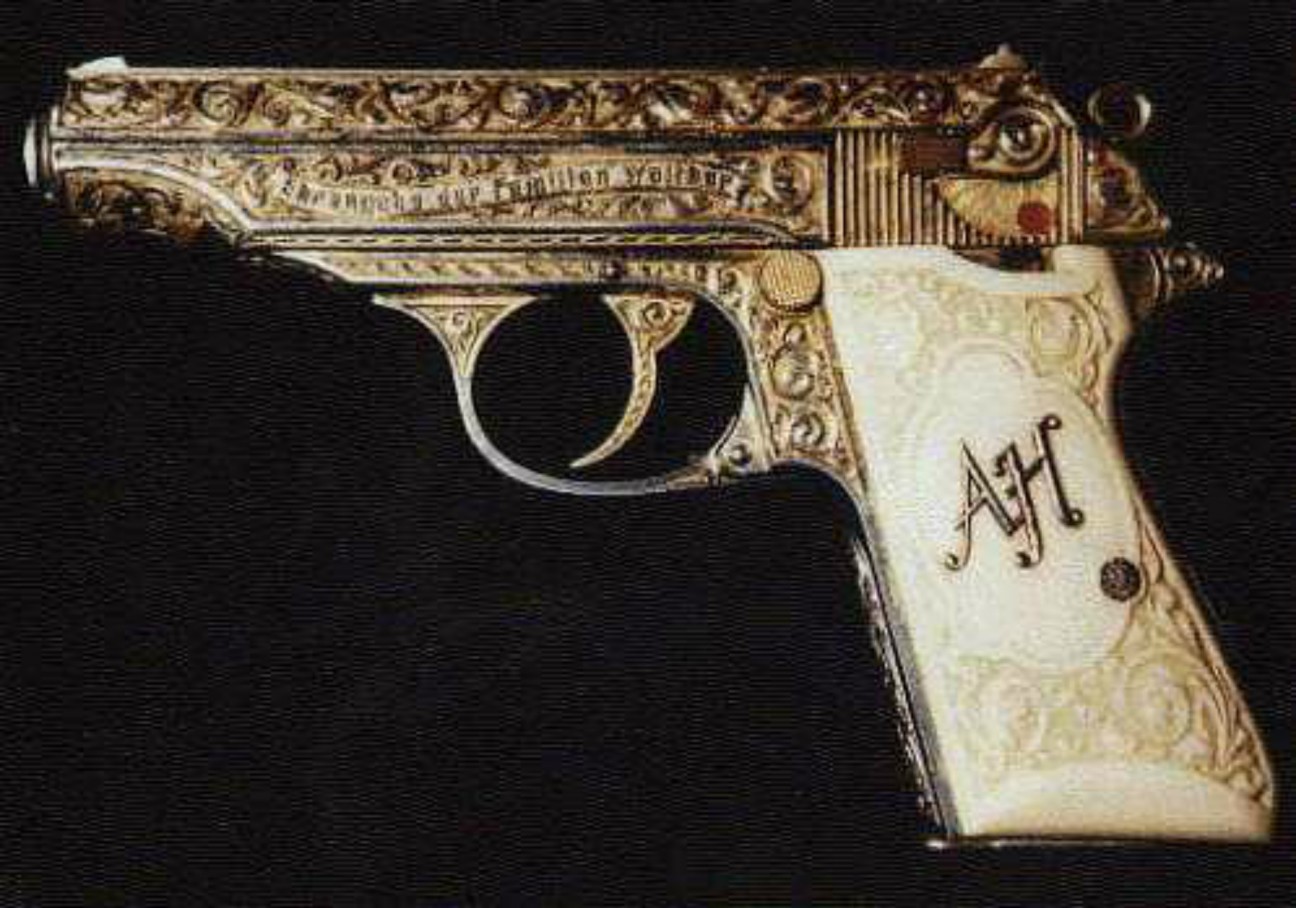 This historical piece is the 10th most expensive gun to be sold at an auction. It once belonged to history’s greatest villain, Adolf Hitler. The gun also known as The Fuhrer’s Golden Gun was a gift to Adolf Hitler on his 50th birthday from the Walther family in 1939. It is a golden 7.65mm Walther PP with an ivory grip and a gold-inlaid inscription, which showed that it was presented by the Walther family. Adolf Hitler’s initials AH can be seen boldly inscribed on the exotic custom made, and double-action, straight blowback pistol. The Walther family used this not only to honor Hitler on his birthday but also to thank him for replacing the Luger P-O8, with the Walther P-38 in his army. It is believed that Hitler committed suicide with this gun, which he kept safely in the desk drawer of his Munich home while hiding in the bunker during the raid by the Allied troops. The pistol was recovered by an American soldier and taken to the United States where it switched hands several times before been finally sold for $114,000 at an auction. This price was as that time the highest ever paid for a firearm. The current owner remains anonymous, but if ever The Fuhrer’s Golden Gun was to be put up for auction again, its value could reach into millions.

The history and perhaps value of this Wyatt Earp’s Colt .45 revolver lies with the man, Wyatt Earp. Wyatt Earp was the most famous lawman of all time. He worked as the deputy sheriff in Tombstone, Arizona, in the 1880s. If you know the story, then you know there was no Marshall who represented the rough, tough, and dirty Wild West man like Wyatt Earp. He was well invested in gambling, gold mining, brothels, boxing matches, barbershops, saloons, and anything that spelled profit at the time. As expected, Earl was a part of the notorious gunfight at the O.K Corral. Earp and 3 other lawmen killed 3 outlaws in 30 seconds, and supposedly, this Colt.45 revolver was the weapon used by Earp in the shootout. Some believe it wasn’t this piece at the shootout, but a .44 Smith & Wesson, Earp was thought to own then. Regardless, this longstanding debate didn’t stop the Colt.45 revolver from been sold at an auction for $225,000. It was last sold to an anonymous Mexico collector in 2014.

It’s not strange or new to see that the likes of the British Royal Family hold preference to a Holland & Holland Royal Deluxe Double Rifle. The brand proudly boasts of the long 850 painstaking hours spent crafting this piece by hand. It’s highly believable, judging by the rifle’s appearance and performance. This sort of skilled craftsmanship and detailed approach is what has made many of the world’s elite the bulk of Holland & Holland’s clientele. The specifications of this gun include a .375 caliber H&H Belted double rifle, a 24-inch barrel length, weighs a bit under 12 pounds, and detachable mount sights zeroed at 100 yards. The rifle’s engraving serves for more than aesthetics by diffusing light reflection during use. It is available in the London Gun Room and priced at $228,000. Owning this rifle means being the focus of any gathering.

Better known as the gun that killed Jesse James, this Smith & Wesson .44 Owned by Robert Ford was sold at $350,000 to a gun collector in 2003. Jesse James was a notorious and troublesome outlaw of the American West who ran a vicious gang during the mid-1800s. They robbed stagecoaches, trains, over 20 banks, and even went on pillaging campaigns. He became a legendary figure and proved difficult to track down. Soon James and his gang grew too confident and became careless. They continued to make serious mistakes. A bounty was placed on his head and Ford and his brother Charley, who were both members of James’ gang, hatched a plot to kill him for several months. On April 3rd, 1882, Robert Ford also remembered as, “The Coward Robert Ford,” shot an unarmed James at the back of the head as he stood on a chair to dust a picture frame. The brothers intended to collect the bounty placed on James’ head by the government. In court, Charley testified that Robert had used the now-famous Smith & Wesson revolver because it could easily be hidden or removed from the pocket. The collector who recently doled out a whopping $350,000 for this gun, is unknown. This revolver is prized for its dark history and would make a fine addition to any collector’s vault.

An avid hunter and Rough Rider were some things US president Theodore Roosevelt loved to be associated with. It was said that the president engaged in almost everything that defined the concept of manliness. This custom double-barreled shotgun was made for Teddy Roosevelt by the Fox Gun Company. In his thank you letter to the company, this revered figure spoke highly of this firearm saying, “no better gun was ever made,” The shotgun became the president’s constant companion especially for the reason it was produced and gifted - a Smithsonian African expedition in the year 1909. The expedition lasted an entire year, starting from the month he left the presidency at the white house. The double-barreled shotgun is an FE-grade 12-gauge shotgun and was originally sold by the Roosevelt family in 1974. Years later in 2000, it was sold again and then in 2010, an unknown collector purchased the historical relic for a hefty $862,850. The shotgun could easily be broken down and boxed like a Beretta Silver Pigeon 1. 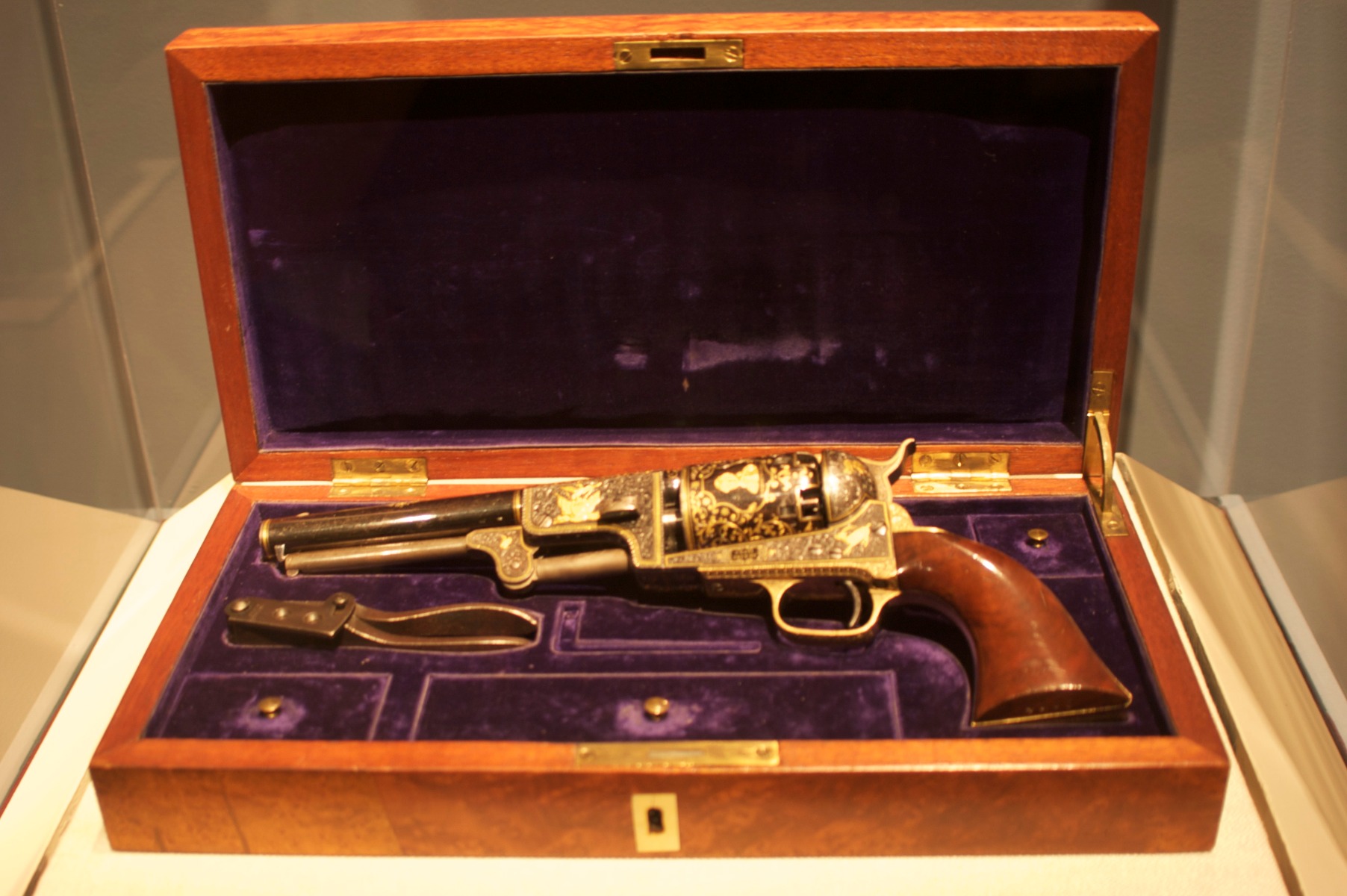 Only 1,100 Walker pistols were ever made and today only 170 are believed to exist. This Colt Walker featured on this list was issued to Texas Ranger Sam Wilson as a standard issue in 1847. It was specifically designed for the elite task force that helped to maintain order in that territory. This Colt Walker is a black powder revolver known as being capable of shooting either a  .44 caliber round ball or 220-grain bullet. It was quite the versatile piece. This 1847 Colt Walker stands out because unlike many which still exist, it remains in pristine condition. It was free of rust and included the black powder flask also originally issued to Texas Ranger Sam Wilson along with the revolver. These factors and its past owner made the value of the 1847 Colt Walker .44 Black Powder Revolver shoot all the way to $920,000 with which it was sold to an anonymous collector in 2008.

Ever wondered how the repeating firearm came to be? The range of Colt Paterson Revolver was the first-ever repeating firearm patented by Samuel Colt in 1836. The design for this pistol was the first to incorporate a revolving cylinder that cycled through multiple rounds. This pistol was the pioneer for the revolvers now known to us all. It was manufactured in Paterson, New Jersey, which accounted for the name. This particular Colt Paterson Revolver is the longest surviving Paterson in existence, and not just that, it’s also in mint condition. Considering its dynamic historical significance and the limited number of Patersons initially produced, it’s no wonder this Colt Paterson Revolver was sold for $977,500.

Like everything else in recent times, the Gold-Inlaid Colt Model 1849 Pocket Revolver is an upgrade from the Colt Paterson Revolver. This gun was designed to be better streamlined to ease carrying. It also shows us how the technology of the repeating pistol evolved between 1936 and 1849. The new Model 1849 Pocket Revolver was one of the most welcomed models during that era. It was recognized as reliable and widely produced. This specific model on this list is unique in its remarkable appearance and its gold inlay. This showed off some exquisite craftsmanship, giving the 1849 piece an auction sale value of $1.1 million.

After capturing the Apache leader Geronimo, Major-General Henry Ware Lawton became famous and was gifted with this Winchester Rifle to honor his successful military campaign during the era of the Apache Wars. The rifle serial number was ‘1’ making it identifiable and a rare gun. Also, in its blue, case-hardened finish is an engraving showing the rifle’s status as a gift from a recipient of the Medal of Honor, Lieutenant George E. Albee to the Major-General. The Winchester rifle features a 26-inch octagonal barrel along with a full-length magazine and was sold at $1,260,000. Steep, but looking at this list, it’s worth it for an exceptionally rare rifle. 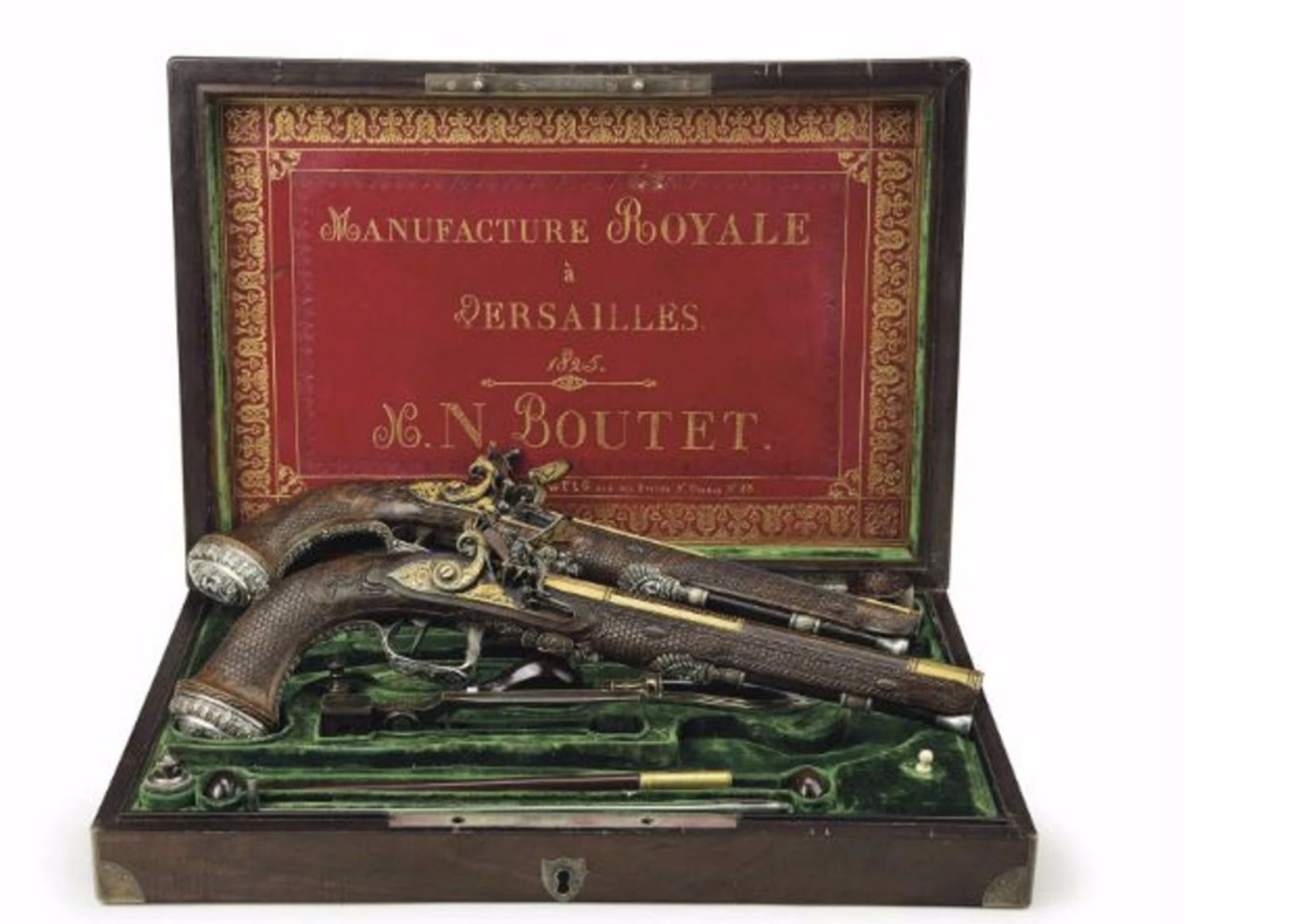 Simon Bolivar was the famous liberator of South America from Spanish colonial rule. He owned this pair of Flintlock pistols, which was presented to him by the Marquis de Lafayette. The Marquis de Lafayette served under George Washington during the Revolutionary War, and the maker of the flintlock pistols was none other than the famed French gunsmith Nicolas-Noel Boutet. Many already knew him as Napoleon Bonaparte gunsmith. The silver-mounted Flintlock dueling pistols were auctioned in 2004 at Christie’s of New York for a worthy amount of $1.76 million. Simon Bolivar was a great collector of firearms, but still, the Flintlock pistol stood out as one of the finest in his collection. 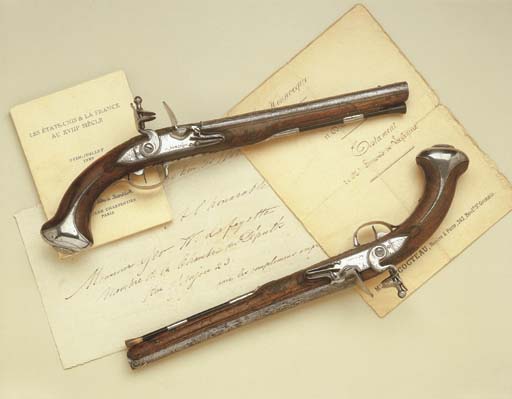 It would seem that The Marquis de Lafayette was in the habit of presenting spectacular guns to famous men. The popular saddle pistols were given to George Washington by his French ally, The Marquis de Lafayette. The pistols were designed with detailed rococo carvings and gold inlays. Washington used these pistols throughout the revolutionary war and in time they were passed down to President Andrew Jackson who treasured them so much he referred to them as “sacred and holy relics,” In 2002, they were sold at an auction price of $1,986,000 to the Richard King Mellon Foundation at Christie's, who in turn donated them to the Fort Ligonier historic site and museum.