World War 2
There is no way to say for sure, but my guess (as well as others) is that production for the Walther PPK stopped in late 1944. I can't say for sure that there were NO PPK's made in 45, but I can say there is no evidence of full production.

Ron Clarin has documented what the GI's found in the factory when they took over in 1945. You will see photos with racks of PP's and crates of P.38's, but NOT a bunch of unfinished PPK's. Random frames and slides, yes. Spare parts? Yes. Enough to put together a few unnumbered PPK? I believe, yes. And I have seen such guns that I would guess were put together from leftover parts. But not like the thousands of Post war PP's and P38's that you can find. GI mismatch PP's and P38's are fairly common. But where are the GI mismatch PPK's?

You will find AC marked PP's, with NO legend and no proofs. Yet you do not find them among the PPKs. All have the full slide legend and the finish characteristics of a 1944 PPK.

Consider this, for you P.38 gurus. Imagine 100 P.38's lined up in front of you, but all dates on them are hidden. Now you have to date them and line them up in order of production based solely on their finish. This is what we have to do for PP's and PPK's (Of course there are some exceptions with documented dates, but these are rare). I would bet many of you would be "spot on" with dating. An early AC41 looks different than a later 41. Same with early and late 42's, etc. In the late war era, the machining and finish deteriorates even more. And in 1945 you see casting flaws in the metal. (Characteristic "chunks" out of the metal on the front strap of an AC45). I have observed similar casting flaws in 1945 PP's. Not so, in PPK's. The PPK's remain uniform in production.

Previous collectors have always assumed PPK's and PP's were produced until April of 1945. But the finish characteristics, the slide legends and evidence from what was in the factory at the end of the war all point to the fact that they were NOT being produced when the GI's entered the factory in 1945. The PPK is unique from other Walther pistol production in this way. 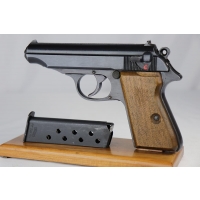 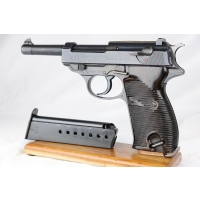 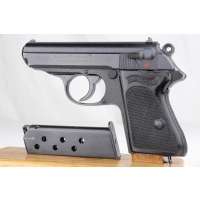 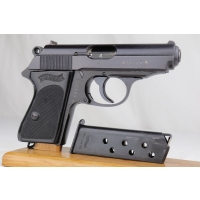