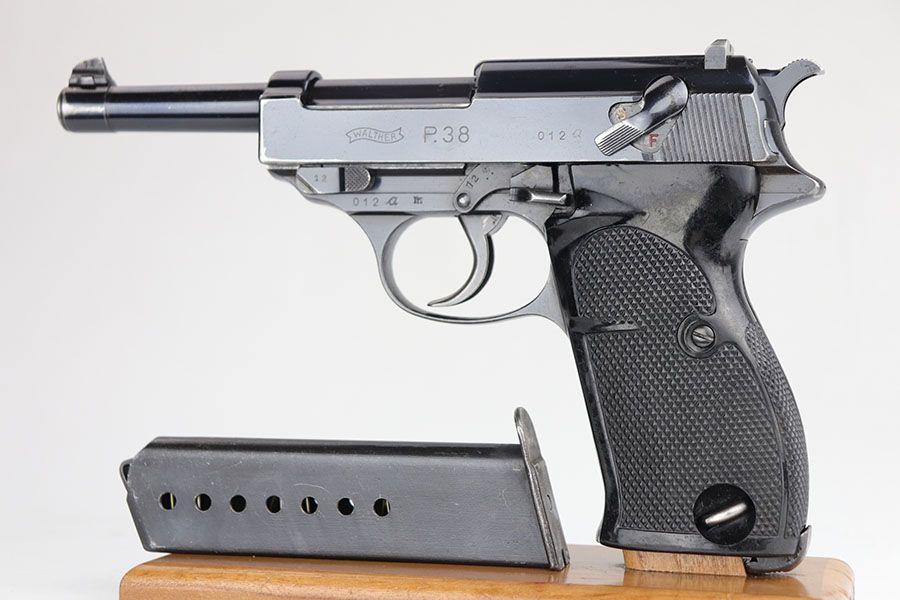 Add to Wish List Add to Compare
Description
3/19/20 - This is one of the most rare P.38 variations from the Nazi era, and within the first dozen P.38s ever produced. Krutzek's book on the P.38 refers to this pistol as a variation 1a example, with a production quantity of only 35, so here's an opportunity to own of the rarest and earliest P.38s ever built (a similar example can be examined here: http://p38guns.com/028a.htm). There are only seven serial numbers recorded in Krutzek's book, making this the eighth known! The significance of the a-suffix isn't known for certain, but the numbering process does not follow the same suit of later P.38s. The original blue rates at 90% or so, with most of the finish loss on the front strap, and some edge wear on the slide. All numbers are matching, including the grips, and many small parts are numbered which would not be seen on any other P.38 variants. Magazine is only non-matching piece, but is close (#072). Early features include the hidden extractor, rectangular firing pin and "stepped" slide. Bore is near mint. De-cocker is tight but does work. This gun could be in a museum - maybe YOUR museum.
Details
We found other products you might like!