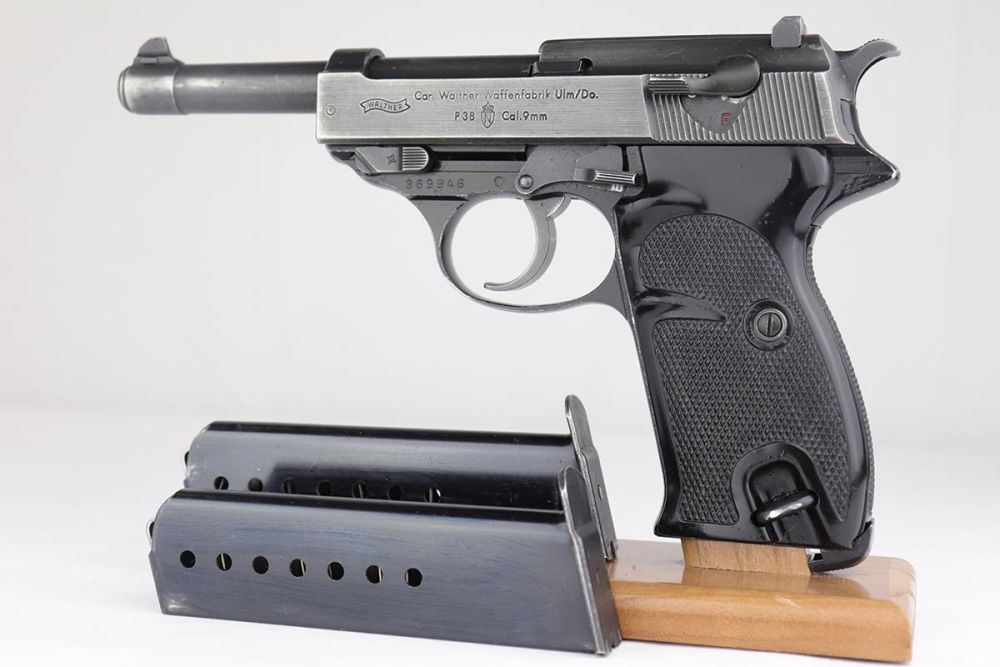 Add to Wish List Add to Compare
Description
4/19/19 - This is a super rare Walther P.38 rig that was part of a Norwegian military contract. It is estimated that only 25-50 Norwegian-marked P.38's are in the United States, and that only ~200 total still exist. The Norwegian government sold a limited number as surplus and then destroyed the rest, so not many survived. This pistol is listed by serial number (369946) in Per Mathisen's "Walthers P.38 Pistol In Norway" in the table on pp. 254-256 titled "Reserve pistols coming from the main arsenal at Lillehammer". From the information in the book I infer that this is a Norwegian Army pistol rather than Air Force. This pistol is near the end of the last contract block (369000-370000). The gun, WW2 holster and spare magazine were part of the iconic Warren Buxton collection, and sold via Julia's Spring 2018 auction as part of lot 3360. This listing can be found under Morphy's auction house (they absorbed Julia's not long after this auction) for confirmation of the provenance. This pistol is all correct and original: the slide, barrel and locking block are consistently marked and proofed, although not numbered. This is correct as these were originally commercial pistols pulled for the Norwegian contract - note the circle proofs without a dot which was used for commercial production. This lot was delivered in the 1975 time frame, and as such this has the desirable "fat" or reinforced slide and the stronger forged lock block, but not the frame hex pin. The hex pin didn't get added to commercial pistols until the following year. The slide has the correct, unique factory roll-mark that includes the Norwegian crest. The right side of the slide, right side of the frame, and front of the barrel are marked with 2 "E/413" proofs. The lock block has one E/413 but it's hard to make out. The overall condition of the pistol is around 85-90% with some thinning of the slide and barrel, and minor wear on the trigger guard. Terrific bore. There is a small import mark on the left frame under the grip panel, completely hidden. Grips are in very good shape and free of cracks or chips. Both magazines are in excellent shape, and are commercial polished blue with the Walther banner and P.38 9x19mm marking on the lower left side but no other markings. The leather holster is an unknown maker, as the belt hanger added by the Norwegian military obscures the makers mark and Waffenamt. It's in very good condition with intact stitching, and the lift strap is still in place.
Details
We found other products you might like!