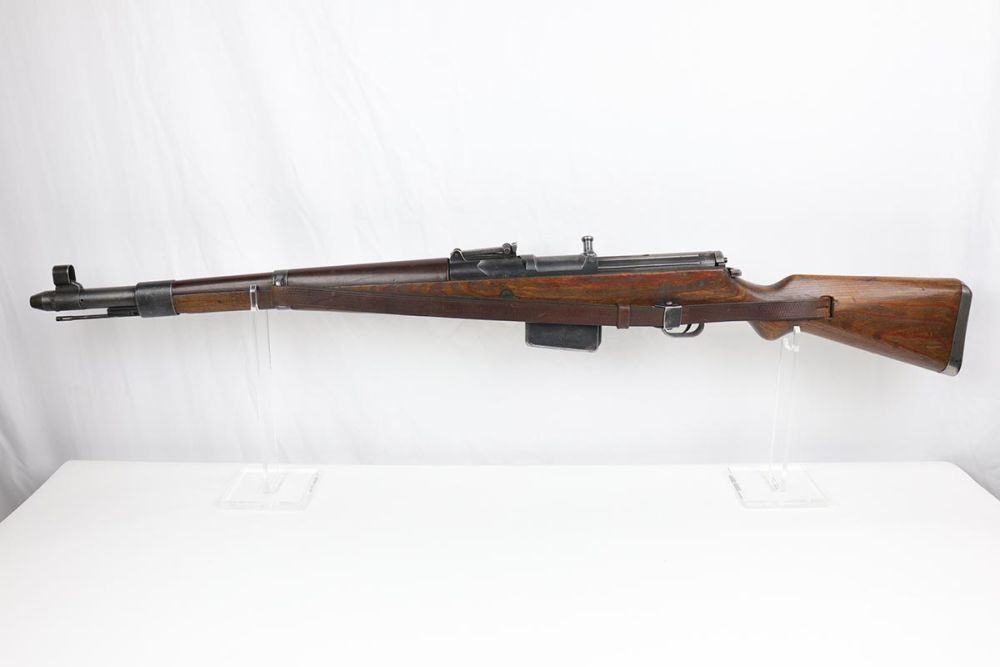 Add to Wish List Add to Compare
Description
5/25/20 - This is a rare and desirable Walther Gewehr 41 (G41) rifle from World War II. The receiver is marked with 'duv 43' code, denoting it was manufactured at the Berlin-Lubecker factory. There were fewer than 10,000 estimated G41s produced before production switched to the G43/K43. These early G41 series of rifles used the "Bang Gas-Trap" system which employed a barrel mounted "Gas Trap" muzzle cone to trap hot gas that was bled off when the round was fired, which cycled the action. This entire series of rifles was very short lived however it was used extensively on the Eastern Front where a semi-automatic rifles was considered essential for "long-life". Consequently, their survival rate is very low in any condition. The later series of G/K43 rifles did away with the earlier "Bang" gas trap style system and instead used a barrel mounted gas system, that was copied from the Russian Tokarev rifles, making them far more reliable and easier to produce. The Walther design was more successful than the Mauser design at least, as they removed the bolt and had a cleaner receiver area as a result. This particular rifle is all matching and correct, with fully matching numbered parts. The receiver and all numbered areas of the upper/barrel are matching, as is the stock, mag well and trigger assembly. E/214 proofs present on several metal parts, as well as E/359 on the barrel band and safety. The finish on the metal parts is in very good condition, with some thinning on the barrel, barrel bands and trigger group, but no rust or pitting. The stock is in very good condition, with no major cracks. It does have various dings and nicks, as well as a 2-3 inch long surface crack on the right side. It does not go below the surface, and does not appear to affect the structural integrity of the rifle. This one does not have the dust cover on the bolt. Later production style handguard, which is made of a dark red/brown phenolic resin that is like a plastic. Bore has strong rifling but frost throughout.
Details
We found other products you might like!