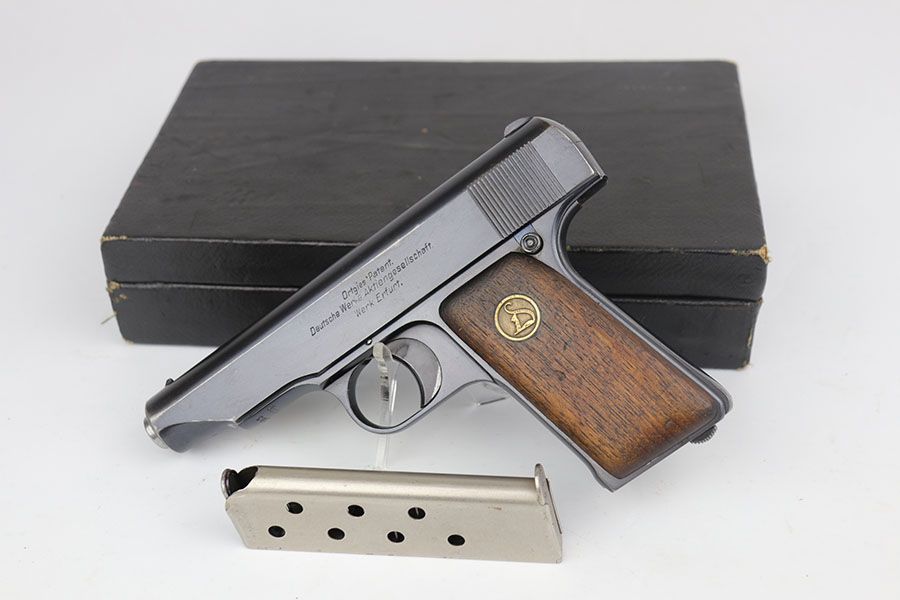 Add to Wish List Add to Compare
Description
7/24/20 - This is an original Ortgies semi-auto pistol that was made in the late 1910s. Original blue rates around 97% with the majority of finish loss on either side of the muzzle, and bottom of grip safety. Terrific bore. Excellent grips and correct magazine. Comes with a display or presentation case that appears vintage but unsure exactly when it was made. The pistol obviously fits the cutout perfectly, and the logo of the grips is imprinted into the felt so it's clearly been in this case for decades. ____________________ These pistols were produced in 6.35 mm, 7.65 mm, and 9 mm Kurz variants, and this one is the 7.65mm variant. Although not expensive, at the time it was of advanced design and high quality construction with relatively few parts, well sealed against dirt. Metal components were forged or machined, and assembly in general made no use of screws, even securing the wooden grips with metal clips, although some examples do incorporate a single screw for that purpose. The hammerless action depended on a spring-loaded striker to fire the cartridge. As in early Colt and Browning pocket pistols, the Ortgies striker also operated as an ejector as the slide traveled backwards after discharge. Unusual design features included the safety and the magazine. The safety was a lever inset into the back of the grip and, with the gun cocked, forced backward out of the grip into the "safe" position by spring tension from the firing pin upon depression of a button under the slide. Thus, engaging the safety simultaneously reduced tension on the firing pin spring. To disengage the safety, a shooter simply would squeeze the grip, pressing the lever forward and locking it flush with the back of the frame.
Details
We found other products you might like!