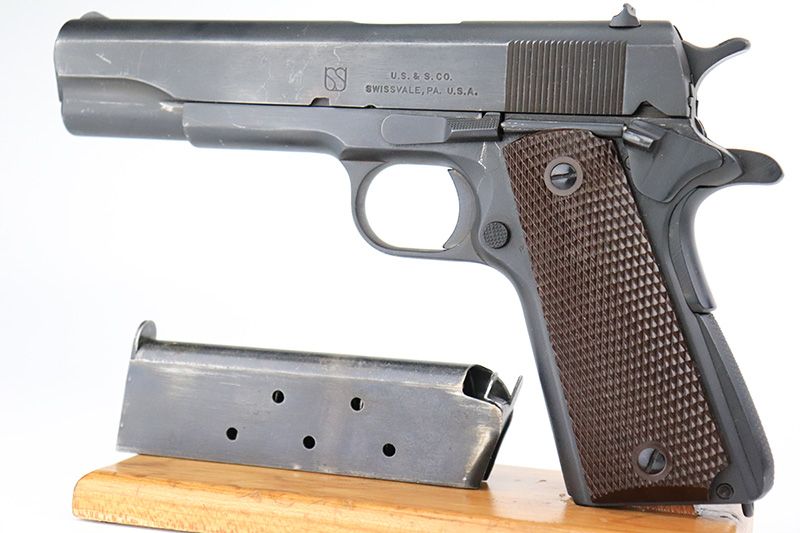 Add to Wish List Add to Compare
Description
9/22/22 - This is a rare Union Switch & Signal M1911A1 issued to the US military in 1943. The US&S 1911a1 pistols are one of the most sought after collectibles from WW2. The Union Switch & Signal company of Swissvale Pennsylvania, primarily made railroad signaling equipment but received a contract on May 5, 1942 for the manufacture of M1911A1 pistols. The first pistols were accepted by Ordnance inspectors in January 1943, but the company received word that their contract would be canceled. Within a month U.S.&S. had signed a contract to supply carbine parts. On March 8, 1943 the company was officially notified that their contract had been cut back from 200,000 pistols to 30,000 pistols. However on June 26th, when the contract was nearly complete, and many of the workers had been transferred to Carbine operations, the company received a letter of intent to purchase an additional 25,000 pistols. The last of the pistols was shipped on November 27, 1943. 55,000 Union Switch and Signal pistols were delivered serial numbered from 1041405 to 1096404. U.S.&S. pistols are the second rarest of the M1911A1s (55,000 produced), only the Singer is rarer (500 produced). None of the Union Switch & Signal 1911A1s have the crossed cannons ordnance stamp. We are told these were issued to the Army Air Corps during the war. This particular example has been professionally restored and refinished. As a result, the finish is actually very nice. However, there are some light scratches and scuffs on both sides of the slide (especially the left side). High Standard barrel. Comes with period-correct reddish plastic grips and a proper "R" marked magazine. Excellent bore with strong rifling.
Details
We found other products you might like!