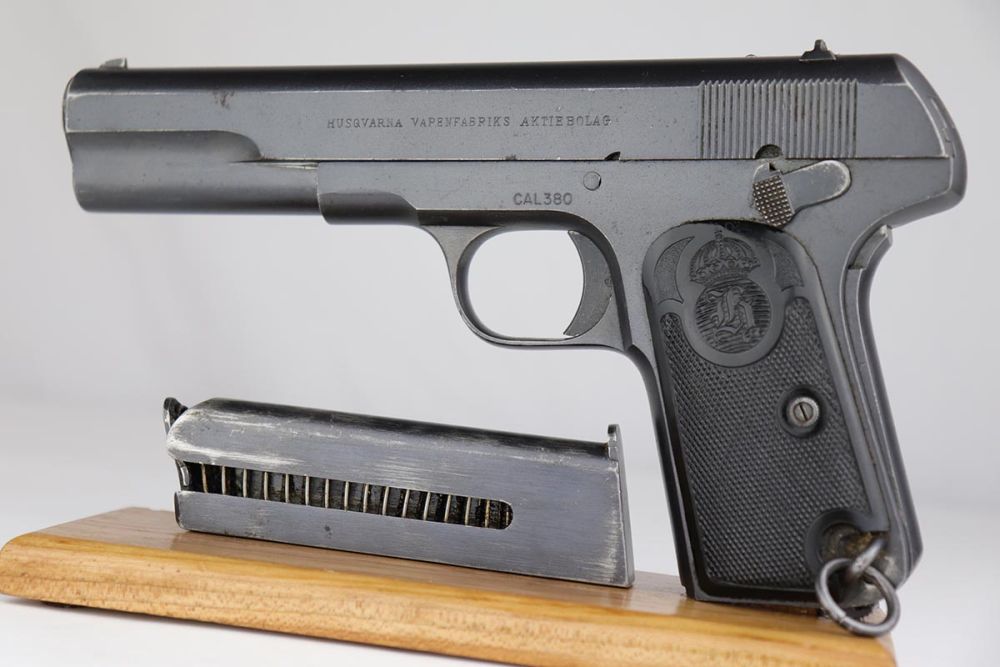 Add to Wish List Add to Compare
Description
5/22/19 - This is a somewhat uncommon find, the Swedish Husqvarna Model 1907 pistol. The origin story on these handguns dates back to the early 1900s, as they were being produced by Fabrique Nationale under the designation of Model 1903. FN had been licensed to produced Browning’s .32 caliber pocket hammerless for the European market, while Colt had the U.S. rights, hence why this pistol looks like an oversized Colt M1903. Several countries reportedly wanted a larger service pistol on the same FN design that could accommodate the 9x20mm Browning Long cartridge, so FN lengthened the barrel to five inches, and added a slide stop on the right side of the frame. Sweden adopted the pistol as their military sidearm in 1907, and imported them from FN under the designation of Model 1907. FN then produced these pistols for Sweden until Germany captured their factory in 1914, and later Sweden procured licenses to produce them at the Husqvarna factory in 1917. This production continued until 1940, when the Lahti took over as preferred sidearm. Tucked away by the Swedish military, these pistols eventually hit the export market and many ended up in the states, such as the one listed here. They were then re-chambered to .380 ACP, and this one was likely imported before all firearms required import marks as none are present. The finish on this pistol rates at about 96-97% with most of the finish loss on the right side of the slide, where it meets the frame. There is also one small area of freckling on the left side slide. Mint bore, and original grips, though likely only one panel is original to the gun. The left panel is in excellent condition, and I presume replaced at some given the right panel shows notable damage. Crown over G.B. marking is present on the rear frame, likely the inspection marking of Carl Gustaf Bjorkenstam. These pistols are said to be fun shooters with minimal recoil.
Details
We found other products you might like!