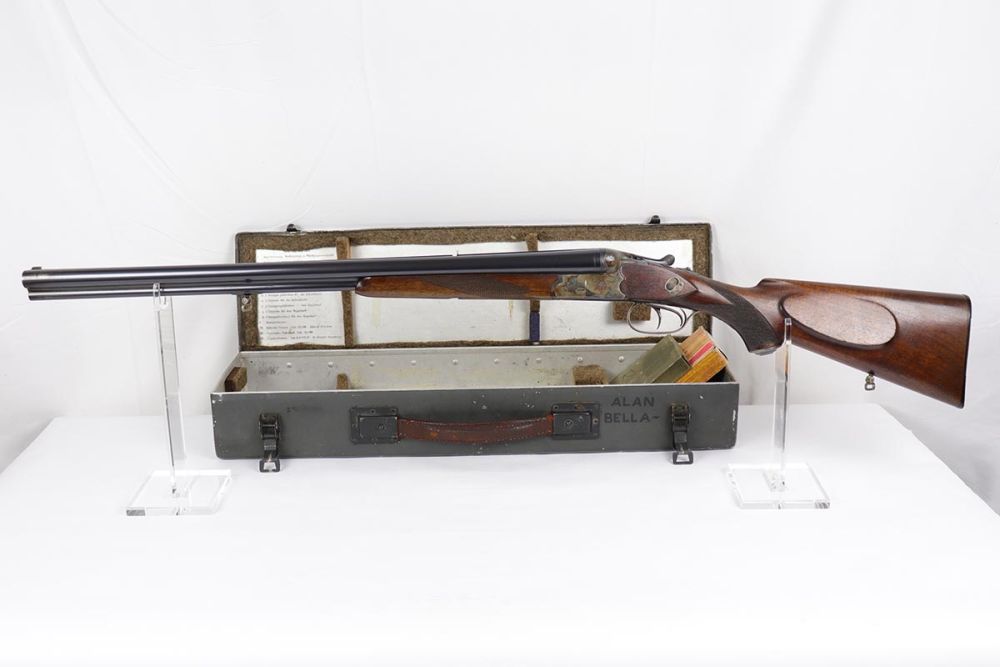 Add to Wish List Add to Compare
Description
5/2/19 - This is a beautiful, cased M30 Luftwaffe drilling, one of the finest you'll ever come across. The original finish is about 95-96% with excellent case hardening. Only notable finish loss is on the barrels, near the muzzle. The bores are excellent and shiny. The stock is as nice as the metal parts, and has a Luftwaffe Eagle on the right side. Barrel is dated to April of 1942. The case is original and has the name of the GI who brought it back from Germany after the war. The paint is original inside and out, but the felt padding on the inside has been replaced in a few spots. The top of the box has the initials AB nicely painted and the front has Alan Bella added. This is the GI who brought it back, and the former owner said he had a capture document to go with this and Alan Bella's name but when he sold it to us, he could not find it. Should it turn up we can pass that along. The Sauer M30 drilling (in German, meaning triple-barrel combination rifle/shotgun) was originally developed by famous German gun making company J.P.Sauer & Sohn as all-around hunting weapon. Introduced in 1930, it was commercially available in several caliber combinations, sporting two side by side shotgun barrels (in 16 or 12 gauge) over one rifled barrel. In 1941, when Hitler's Germany began military operations in Northern Africa, Luftwaffe (German Air Force) adopted Sauer M30 drillings as wilderness survival weapon for air crews, operating over vast North African deserts. It is 12g as well as 9.3x74R rifle ammunition. It must be noted that Luftwaffe bought Sauer M30 drillings outside of standard military procurement procedures, and all Luftwaffe drillings were made to pre-war commercial standards of fit and finish, and thus were rather expensive. Overall, Luftwaffe bought about 2,500 Sauer M30 rifle / shotgun. Eagle/N proofs can be found in a few spots. All matching, and functions well mechanically. The only other accessories are two boxes of ammo. They are vintage ammo but likely not original. One is Rothweil brand 12 gauge shotgun shells. The other is Norma brand rifle ammo in 9.3X74R. Nothing else comes with this listing other than what is photoed.
Details
We found other products you might like!