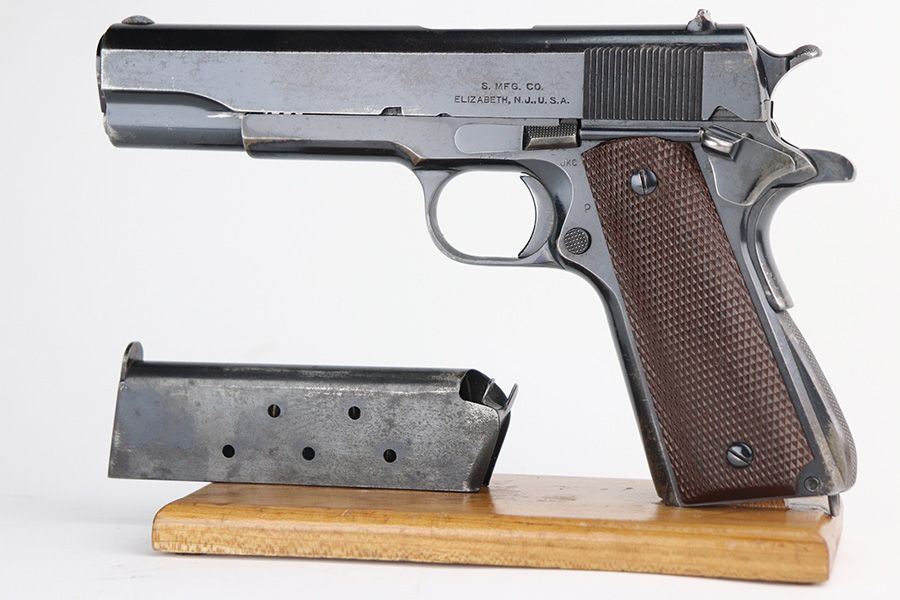 Add to Wish List Add to Compare
Description
6/22/21 - For the first time as a company, we are offering for sale this original Singer M1911A1 pistol from 1941. Known as the Holy Grail for 1911 and U.S. Military pistol collectors, there were only 500 ever produced. This particular pistol is serial number S800042, out of known range of S800001-S800500, and is thusly one of the earliest known examples. The pistol has the commercial quality blue finish on all components including the barrel and stock screws. The brown checkered, hollow-back, stocks have no reinforcement rings around the screw holes. The receiver has the fine checkered mainspring housing, short, milled, trigger with knurled face, checkered safety lock, slide stop and short, wide-spur, hammer. The slide has a rear sight with U-shaped aperture. The only mark on the barrel is a large, block, "P" proofmark stamped on the left side of the lug. We've attached a photo comparing to a known example that was inspected by Clawson. The right side of the receiver is roll-stamped: "UNITED STATES PROPERTY/No S800042" to the rear of the slide stop hole and "M 1911 A1 U.S.ARMY" ahead of it. The left side of the receiver is stamped with the initials of the Chief of the New York Ordnance District, Col. John K. Clement ("JKC"), beneath the slide stop notch and a block "P" proof mark just above the magazine release. 'P' proof mark on slide and frame. The replacement magazine is "S" marked on the top of the floor plate. Produced in the smallest quantities of any U.S. issue Model 1911 or Model 1911A1 pistol and finished with a distinctive, commercial quality, Du-Lite blue, the Singer Model 1911A1 pistols are probably the most desirable of all U.S. martial arms. This particular example shows honest age and wear, with some surface oxidation on the slide, and minor freckling near the ejection port. Given the subjectivity of a bluing rating, and the rarity and desirability of any Singer 1911A1, we will let the photos do most of the talking here in regards to condition. Feel free to email us with any additional questions you may have.
Details
We found other products you might like!