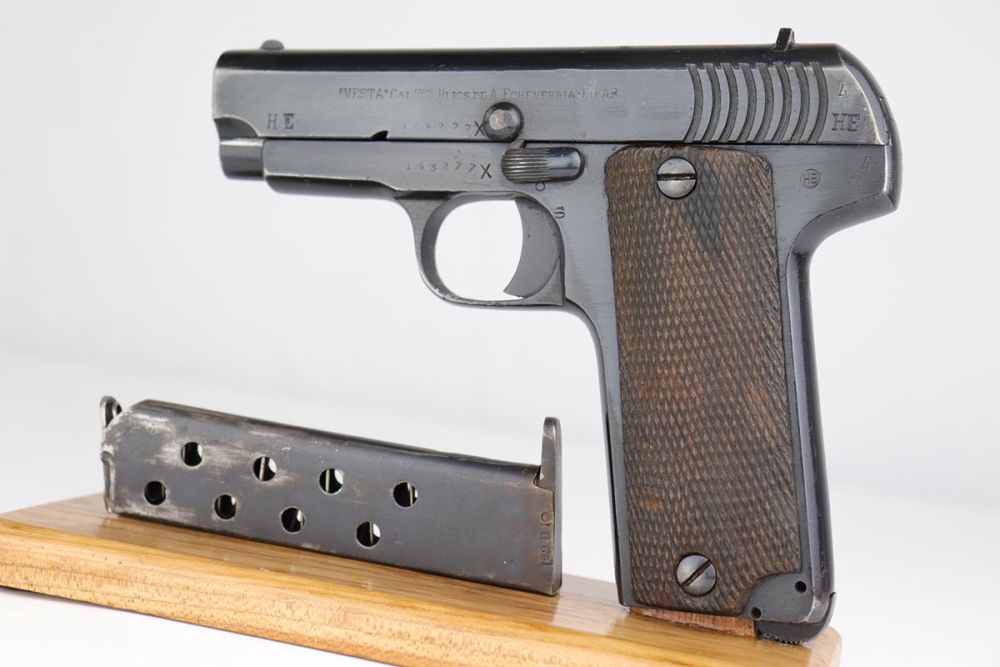 5/8/19 - Made around 1916 in Spain by the Hijoes de A Echeverria company, this is a Ruby pistol that was part of a large contract order by France during the Great War. It retains 97-98% original blue with thinning at the edges, and some patina on the slide and back strap. Terrific bore and excellent grips. French acceptance stars are visible on the bottom of the frame.

In 1914, just before the start of the First World War, Gabilondo started manufacture of a sturdy self-loading pistol based on the Browning Model 1903 and chambered for the 7.65mm Browning/.32 ACP cartridge. Unusual for the time, the magazine capacity was nine shots instead of the usual six or seven. The pistol was intended for export to the Americas, and despite the small calibre it was designed with military and police sales in mind. Other Spanish manufacturers had copied the Browning since around 1905. The Ruby, apart from the extended magazine appears to be a direct copy of a pistol called the "Victoria" made by Esperanza and Unceta. This pistol used features patented by Pedro Careaga in 1911, and by the Esperanza and Unceta company in 1912. These patents may have covered the frame-mounted safety (instead of a grip safety), and an internal striker (instead of a hammer). In 1915 Gabilondo sent examples of the pistols to the French government, who were hard-pressed for all sorts of small-arms, even in this early stage of the war. After testing was completed in May 1915, the French decided to accept the Ruby as the "Pistolet Automatique de 7 millimètre 65 genre "Ruby" and contracted Gabilondo to produce 10,000 pistols a month. By August the target had been raised to 30,000 and later still an incredible 50,000 a month. Despite its size, the company could barely cope with the initial contract and arranged for four partners to manufacture the Ruby for them. The contract stipulated that each company would produce a minimum of 5,000 pistols per month. Gabilondo would produce 10,000 guns, carry out overall quality control and arrange delivery to the French authorities in Bayonne. As the number of pistols required increased the company agreed to purchase any pistols in excess of the agreed number at the same contracted price. As demand increased Gabilondo recruited another three partners to help manufacture the Ruby. Estimates of Gabilondo Ruby production are between 250,000 and 300,000 pistols in total. While most Gabilondo contract pistols were of good quality, others were less well made.