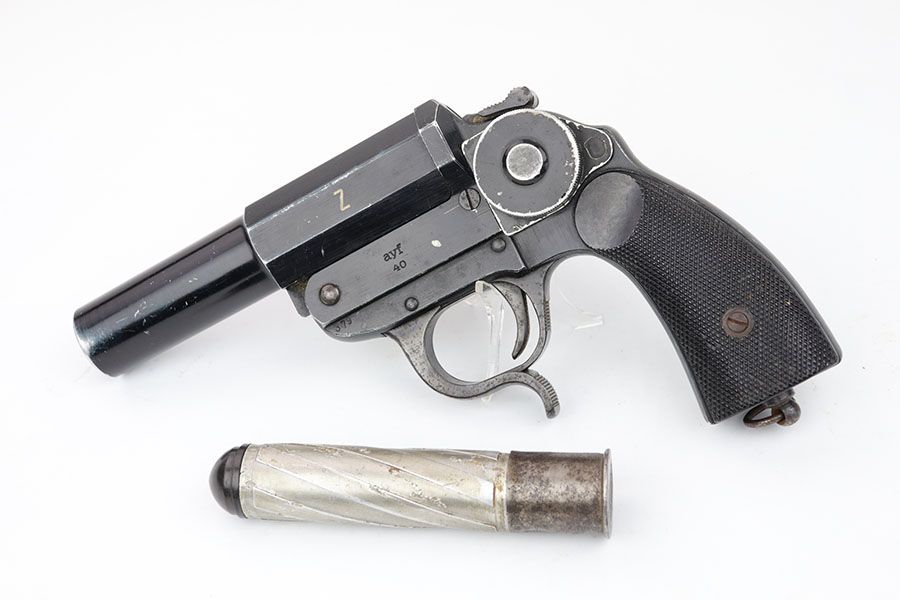 Add to Wish List Add to Compare
Description
4/28/20 - This is a scarce example of an original WW2 Nazi Kampfpistole that was manufactured by the Erma factory. These early kampf-pistols were based on the original Leuchtpistole (flare pistols) design, only they were intended to be used as both a signaling and a "anti-personal" weapon, as they had a unique rifled barrel that could shoot a 25mm rifle grenade, which were the same type of round as used in the K98 service rifle grenade launchers. They are easily identified as the side of the barrel were stamped with a large capital letter "Z" that was filled with luminous paint. This gun is especially rare because it has an ultra-rare adjustable sight on it. It is hard to see in the photos, but it still has the original fluid inside and still shows the leveling bubble. It is also marked "ayf 40" on the left side of the frame. On the right side of the pistol, the hammer, barrel, frame, trigger guard, and trigger, are all "Eagle 280" marked. Overall, this example is in very nice condition. There is wear in the finish around the muzzle, one area of wear on the right side of the barrel, and general wear around the high edges. It is fully functional. It comes with one deactivated rifled round. The bore is excellent - strong rifling with a very minor amount of frosting. Because it can shoot explosive rounds, an FFL is required.
Details
We found other products you might like!