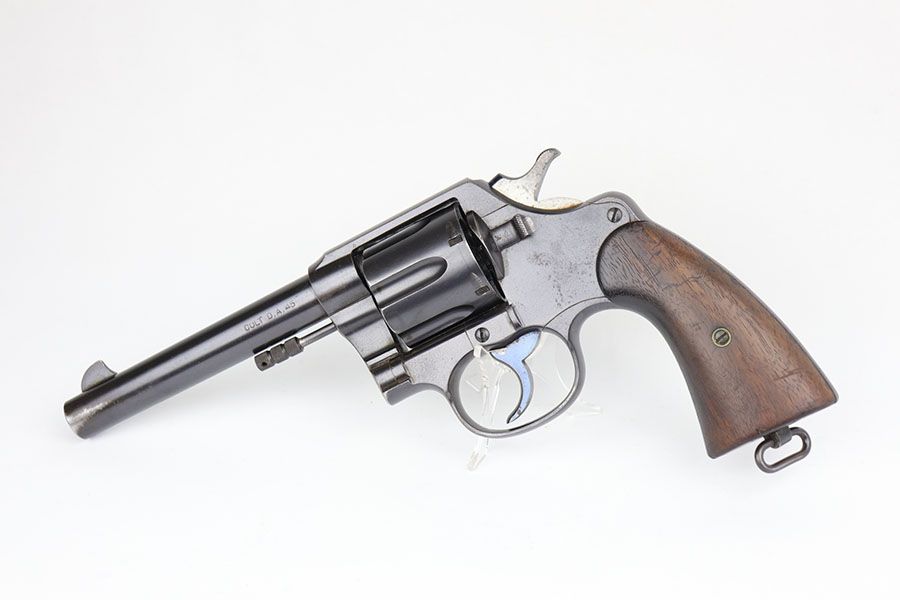 Add to Wish List Add to Compare
Description
7/14/20 - This is a scarce Colt Army Model 1909 revolver that was produced in 1911. Beginning in 1899, combat reports from the Philippines campaign showed that the .38 caliber bullets repeatedly failed to stop Moro fighters, even when shot multiple times at close range. The complaints caused the U.S. Army to hurriedly re-issue the now retired .45 caliber Colt Single Action Army revolvers with newly shorten 5½" barrels. These old war horses handily stopped the kris and bolo wielding fighters and played a central role in the Army's decision to replace the M1892 with the .45 caliber New Service revolver in 1909, and also played a key role in the Army's decision to adopt the .45 ACP M1911 Colt pistol. This particular example is original with RAC inspector marks on both grip panels, the frame, cylinder and barrel. Barrel is also United States Property marked on the underside. The profile shows minimal finish loss but does have some oxidation throughout. The rest of the bluing loss is on the grip frame. Minty bore and smooth mechanically. The grips show some scratches but no cracks or chips.
Details
We found other products you might like!