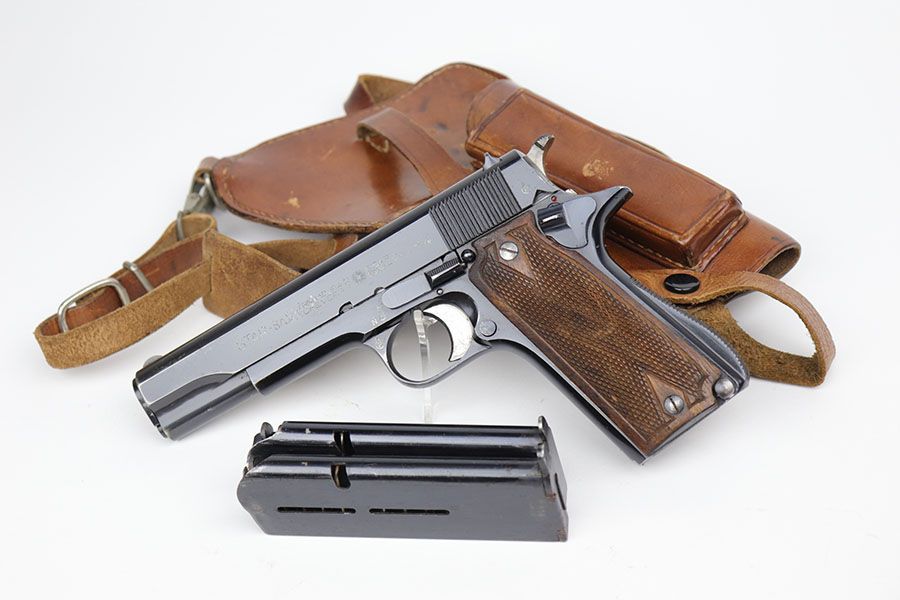 Add to Wish List Add to Compare
Description
10/27/20 - This is a very nice, all original example of a complete Star Model B rig with Nazi proof on the right side tang. It is all original and correct with about 94-95% high-polish blue remaining. There is minor high edge wear on the front half of the slide, and a little more bluing loss on the trigger guard. The firm of Star Bonifacio Echeverria SA, located in Eibar, Spain, originated in 1905 but the factory was destroyed during the Spanish Civil War (1936-1939). It was rebuilt adjacent to the original site, and during WW2 it supplied about 25,000 pistols to the German Army in France. There are two serial ranges for these contracts, with this pistol falling correctly into the second batch and given an E/WaA251 acceptance stamp. Only 10,000 were produced with this proof. The N with tilde denotes 1943 manufacture. The grips and magazine are all original and in good condition. Rig includes a total of two magazines, both original and correct. One is numbered to another pistol on the toe. Minty bore. Rig is completed by a shoulder holster. It could be from the era but it's unmarked so can't say for sure.
Details
We found other products you might like!