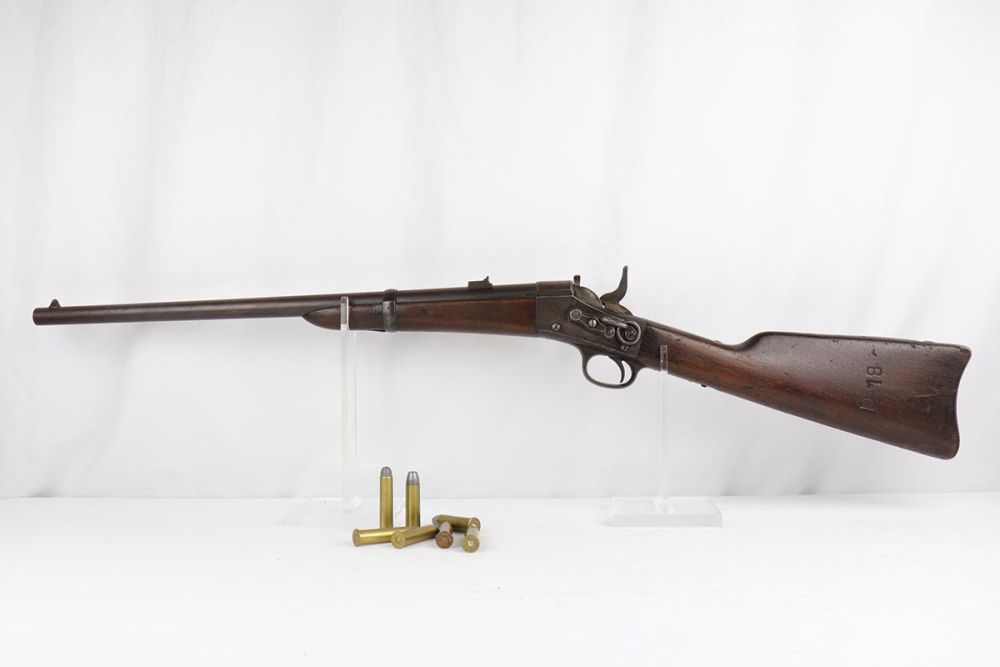 Add to Wish List Add to Compare
Description
2/25/19 - This is a Remington Rolling Block M1872 rifle that was issued to the New York State Militia. After the Civil War, with more than enough firearms in inventory, the Regular US Army wasn’t enthusiastic about purchasing new designs. As the era of the muzzle loading rifle came to an end, the Feds were more interested in converting their existing stocks to breach loaders. When the Army finally decided to adopt a new breach loader, several models were tested, and in spite of the high performance of the rolling block, the Army went with an in-house design very much like the conversions. New York, however, was not bound by what the Regulars did, and so ordered 15,000 Rolling Blocks, with a follow up order of an additional 4,500 a couple years later. The Remington Rolling Block would serve New York until the 1890s, and one source indicates rolling blocks served with NY Militiamen deployed out West during the Indian Wars. The New York rolling blocks had some special features. For one thing, the state specified these had to have a half-cock safety. What really stands out though is the rifle’s exaggeratedly long hammer spur and large side located breach block lever – both with shield shaped cross hatched thumb grips. The stock bears the inspectors cartouche, and is also marked D 18 (likely rifle 18 in Company D). Stock is also marked TROOP "C" NY. Believe it is chambered in .50-70 and comes with seven original rounds, though we wouldn't recommend firing either. The finish shows deep patina but minor actual bluing/rub wear. The stock has dings and nicks and scratches but no cracks. Bore still has some visible rifling but frosted throughout with some areas of corrosion. Antique so no FFL required.
Details
We found other products you might like!