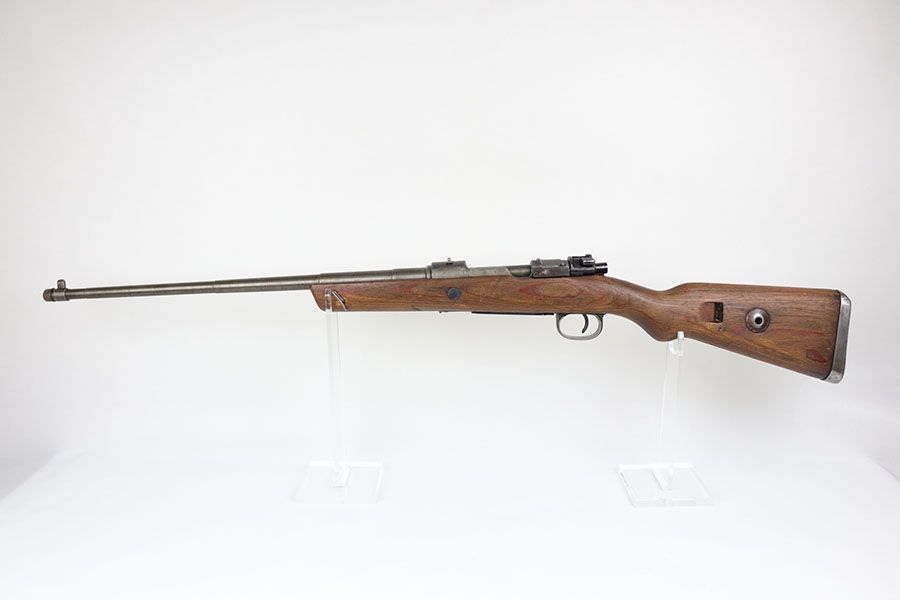 Add to Wish List Add to Compare
Description
5/25/20 - This is an excellent example of a rare Steyr VG-98 rifle. Manufactured at the very tail end of the WWII, the VG-98 was part of the "Volkswaffen" (People's Weapon) series of armaments, intended to gear up German 2nd line defensive formations without diverting higher quality armaments still needed by the main formations of the Wehrmacht and Waffen-SS. Most of the units destined to receive these weapons were "Volksturm" (People's Storm or People's Assault), which consisted mostly of men too old and boys too young to be properly drafted. When the war came to an end, few VG98s were picked up by Allied trophy hunters since they weren't as "pretty" as the more common 98k or mechanically novel like some other Volks weapons, resulting in very few being available on the contemporary American market. The heart of the VG98 is a Model 98 receiver, with crude fixed sights, a roughly finished barrel, and a one-piece stock. This particular example is marked 'bnz 45', denoting it was made in 1945 at the Steyr factory. The finish is shows minimal wear, and is a mix of phosphated and blued parts. Excellent receiver and barrel, but some patina and wear on the trigger assembly. The receiver is not numbered, and the bolt/trigger assembly are all mismatched. Excellent, unmarked stock that is smooth to the touch. Appears to have some faint waffenamts on the right side. Bore looks practically unused.
Details
We found other products you might like!