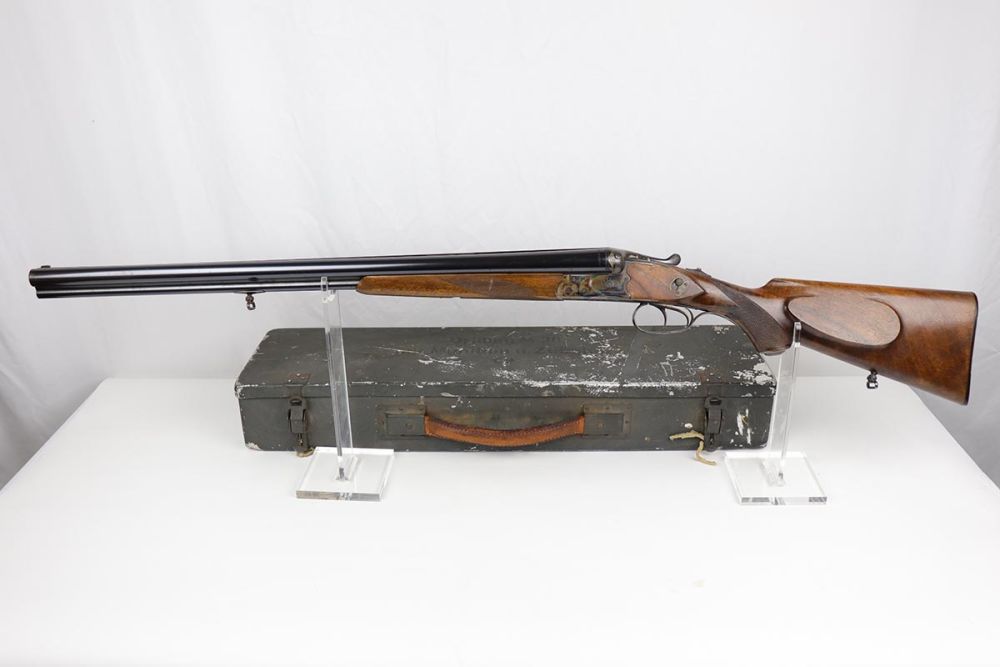 Add to Wish List Add to Compare
Description
7/18/19 - This is a beautiful, cased M30 Luftwaffe drilling, one of the finest you'll ever come across. The original finish is about 95% with excellent case hardening. The barrels/upper show minimal wear, but there is some thinning of the case hardening. The bores are excellent and shiny. The stock is in great shape but has been professionally repaired. The story on this gun is that an extended family member of the previous owner took it from a downed plane. You can see a large bulge/dent in the case, and the stock was partially broken in the fall. Barrel is dated to September of 1941. The case is original and shows obvious age/wear, but has lots of character. It includes a box of the rifle ammo, as well as a sling and cleaning rod/kit. The Sauer M30 drilling (in German, meaning triple-barrel combination rifle/shotgun) was originally developed by famous German gun making company J.P.Sauer & Sohn as all-around hunting weapon. Introduced in 1930, it was commercially available in several caliber combinations, sporting two side by side shotgun barrels (in 16 or 12 gauge) over one rifled barrel. In 1941, when Hitler's Germany began military operations in Northern Africa, Luftwaffe (German Air Force) adopted Sauer M30 drillings as wilderness survival weapon for air crews, operating over vast North African deserts. It is 16g as well as 9.3x74R rifle ammunition. It must be noted that Luftwaffe bought Sauer M30 drillings outside of standard military procurement procedures, and all Luftwaffe drillings were made to pre-war commercial standards of fit and finish, and thus were rather expensive. Overall, Luftwaffe bought about 2,500 Sauer M30 rifle / shotgun. Eagle/N proofs can be found in a few spots. All matching, and functions well mechanically.
Details
We found other products you might like!