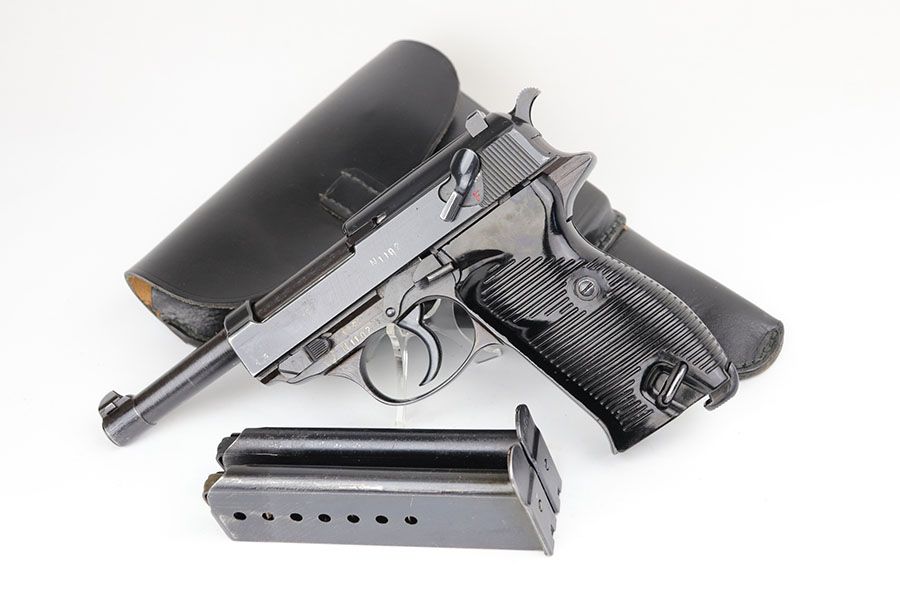 4/29/20 - This is a very unusual and rare P.38, made by the East Germans at the Ernst Thalmann Werk in Suhl. There was a very short run of P.38s, Lugers and PPs made in 1953, of around one hundred pistols each. It is speculated that this was a tool-up trial for full production until the Soviets put an end to it. Regardless, based on the serial numbers known there were only 121 of these P.38's made. There are a number of subtle and not-so-subtle differences from the Walther-produced war-era pistols. One of the most obvious differences is the lack of a P.38 stamping on the slide. Warren Buxton describes these pistols in detail in Volume III of his 3-volume P38 book. Aside from the unique characteristics that set this variation apart from all other P.38's, the serial number is prefaced with an "N" and falls in a range from N1000 to N1120. It appears that the East Germans manufactured all the parts new with the exception of the barrel, which was made by Ceska Zbrojovka aka CZ (WW2 code "fnh") using WW2 tooling, and possibly the locking block. Where the lock block type is known, they appear to be re-used/re-numbered WW2 lock blocks. This pistol (N1102) has a completely blank block which was probably a parts-bin leftover from WW2.

This pistol is all-correct and original, and retains all of it's markings and matched parts. Most of the known examples in the US have at least some markings peened out, due to the politics and rules of importing Eastern Bloc firearms back in the day. The finish is original as evidenced by the trigger spring, extractor plunger, barrel pin, etc. being in the white. The sear is case-colored, not blued. The bore is excellent, shiny with sharp rifling and no frosting or pitting. There are NO IMPORT markings.

The A.B.9 inspection stamp is on the left side of frame, along with the "State Eagle" proof, Crown/U proof and "daisy" final proof marking. An Crown/N proof is on the left front slide and underside of the barrel, along with the barrel date of 8/53 (August 1953). The serial number is stamped on the left side of the frame, left side of slide, and barrel face in positions similar to Walther WW2 pistols. The barrel latch has "02" (last 2 digits of S/N) stamped on it, similar to other known examples. The lock block is unnumbered and unmarked; there are no indications it was ever marked, and there are no grinding marks. There is a noticeable rough appearance to this pistol both in the machining and the parts fitment. The poor fit of the barrel at the front is typical for these.

The grips are of original East German manufacture; these are the only grips with one extra small line on the left side, and the back side is not reinforced like WW2 grips. The grips on this pistol are in good shape on the outside, but have a couple of chips missing on the inside. The material seems to be more brittle than Bakelite so care should be taken when handling. The magazine is also an original East German piece. These magazines can be distinguished by the lack of visible welds, the rough finish with circular machining marks ("swirls") and the top of the magazine follower being ground smooth.