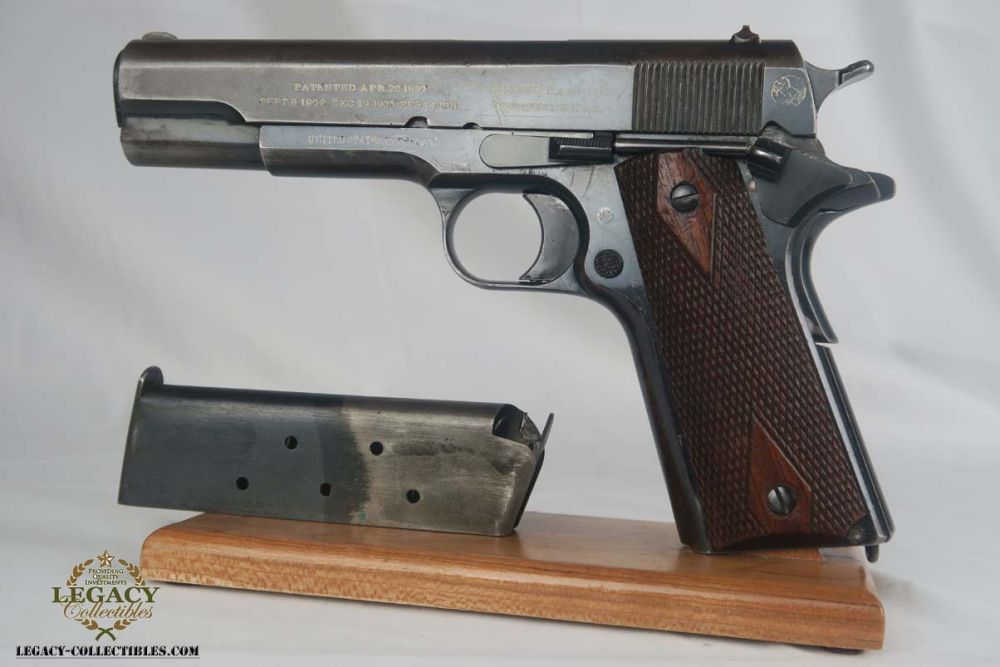 3/29/17 - This is a very early and very desirable Colt 1911, produced in 1912 and issued to the US Navy.  These U.S. Navy contract pistols with the early U.S. Navy marked slides and early style small serifed lettering and serial numbers are probably one of the most difficult of the standard issue Model 1911s to acquire. There were a total of approximately 15,037 of these early style, U.S. Navy marked slides produced in total and this was changed (to standard U.S. Army markings) after 1915 as the Army, who was the Ordnance proponent for service pistols wanted standard markings and serial number placement throughout the Model 1911 production.  So their survival rate in original unaltered condition is extremely low, since they were in service for the next 80 years. The left side of the slide has the standard Colt two line, two block address and patent marks with the circled Rampant Colt logo behind the serrations. The right side has the rare Navy markings of: "MODEL OF 1911. U.S. NAVY", with the early and correct sideways stamped provisional letter "H" directly above the firing pin stop. The right side of the frame is stamped with the circled "WGP" inspector mark of Major Walter G. Penfield's, U.S. Ordnance inspector with the "UNITED STATES PROPERTY" on the left side with the smaller sized serial numbers "No.7325" (with serifs) on the right side. This pistol has all the early features, such as the early, half-moon front sight blade, with the rounded notch rear sights, short, wide checkered hammer spur, long smooth face trigger, short grip safety, flat mainspring housing, early pattern 1912 checkered thumb safety and checkered, diamond walnut grips as noted above. This pistol is fitted with the correct style early Colt all blue barrel that is stamped with the early sideways stamped provisional letter "H" on the rear face of the sight hood with a single number "5" sub-inspector's mark on the underside in front of the barrel lug.  The finish on this pistol is somewhere in the 70-80% range.  It is a little difficult to rate as there is patina coming through the finish throughout the pistol, but the actual finish loss isn't too bad.  Bore is excellent for a 100 year old pistol that likely saw a good amount of action - I'd rate it an 8/10.  Magazine is a proper 1911 Colt magazine, but not correct for a gun this early.