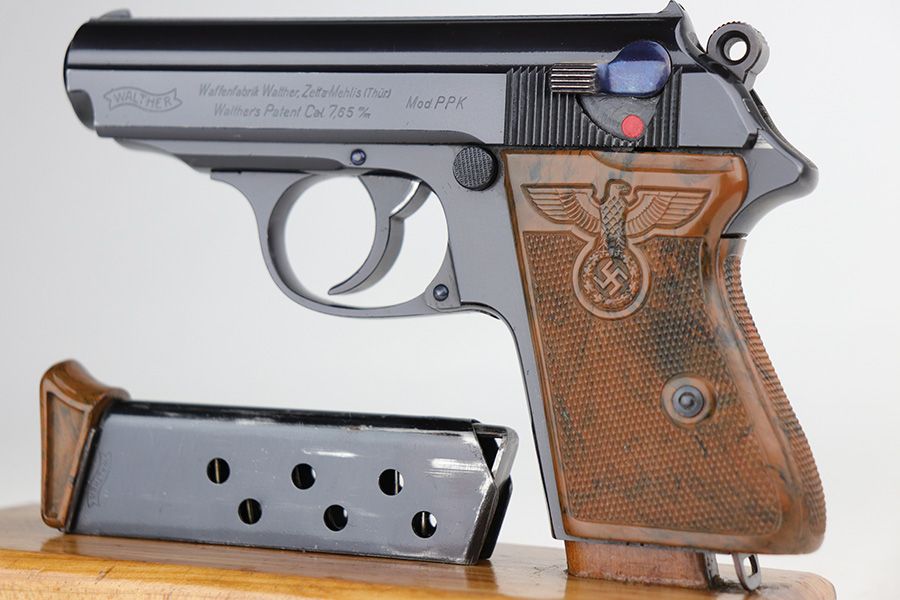 Add to Wish List Add to Compare
Description
10/1/21 - This is a rare, near-mint Party Leader Walther PPK from the Nazi era. The original blue rates at about 99%, with only minor bluing loss on the right side of the muzzle/slide.  The serial number on the interior of the slide is matching with the frame. The serial dates it to 1937, and is slightly earlier than the posted range for the issuance of the Party Leader "Honor" Grip. The grip is in excellent condition with a nice color swirl and is all original. It does have a small crack on the right side of the grip, but no warping. Minty bore.  Excellent finger extension magazine, which is without cracks or chips. _____ The Walther PPK with Party Leader Grips was the "Honor Weapon of the Political Leaders". The Hoheitsabzeichen or High Insignia is the Eagle over Swastika found on either side of the grips where the Walther banner is normally located. The person entitled to wear the honor weapons that were awarded them by the Fuhrer were the Political Leaders of the national, regional and district territories, as well as leaders of local and support units. The persons who wore the honor weapon had their authorizations listed in the district personnel offices, and had to have in their possession a weapons permit issued by the police, which was obtained through official channels. These rare pistols were estimated to number around 3,500, and are widely faked, but this one is guaranteed original.
Details
We found other products you might like!