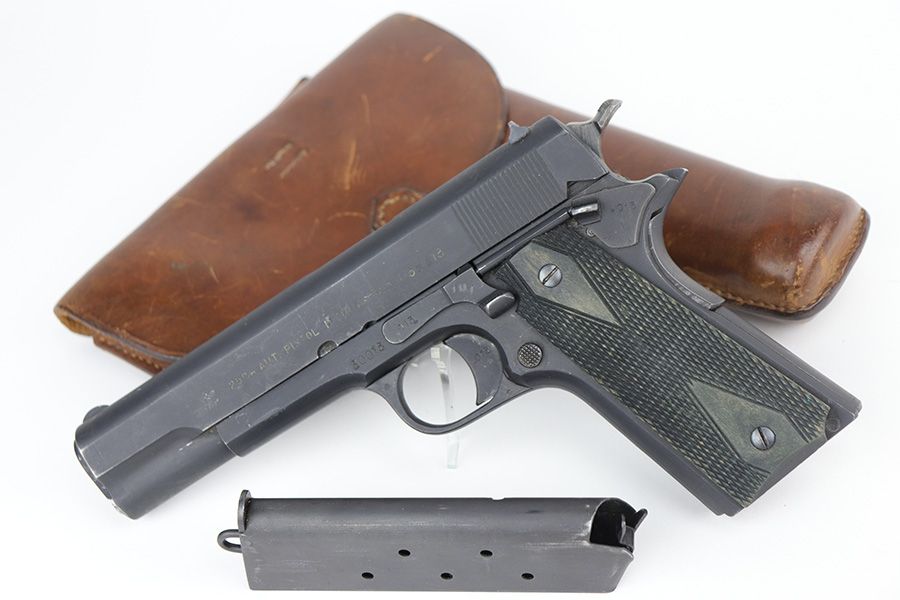 Add to Wish List Add to Compare
Description
8/20/21 - This is a near-mint Kongsberg Colt model 1914, manufactured in 1945 and issued to the Nazi Army. These are rare pistols, and this one is all original. The finish rates at 98-99% with hardly any finish loss, just a little muzzle wear and a small spot on the mainspring housing. Colt licensed out production of the 1911 to Kongsberg Vaapenfabrik in Norway, who in 1945 produced less than 1,000 of this waffen variation according to Jan Still's book. This particular piece falls in the documented serial range of 29261-30523, where only ~100 have been reported. It has the original matte blue finish and stained birch grips, which have retained a good portion of the dark stain finish. The gun is 1945 dated, and it is stamped along the left side of the slide "11.25m/m AUT. PISTOL M/1914" followed by the serial number, above which is a crown/K inspector proof. To the left of this stamp is an E/WaA84 Nazi proof, showing this gun was delivered to the German occupying forces in Norway. All numbered parts are matching, but the barrel is unnumbered. It is 'N' marked, so is an original Norwegian barrel, but was potentially replaced at some point. Minty bore. Magazine is correct. Comes with an original Norwegian holster.
Details
We found other products you might like!