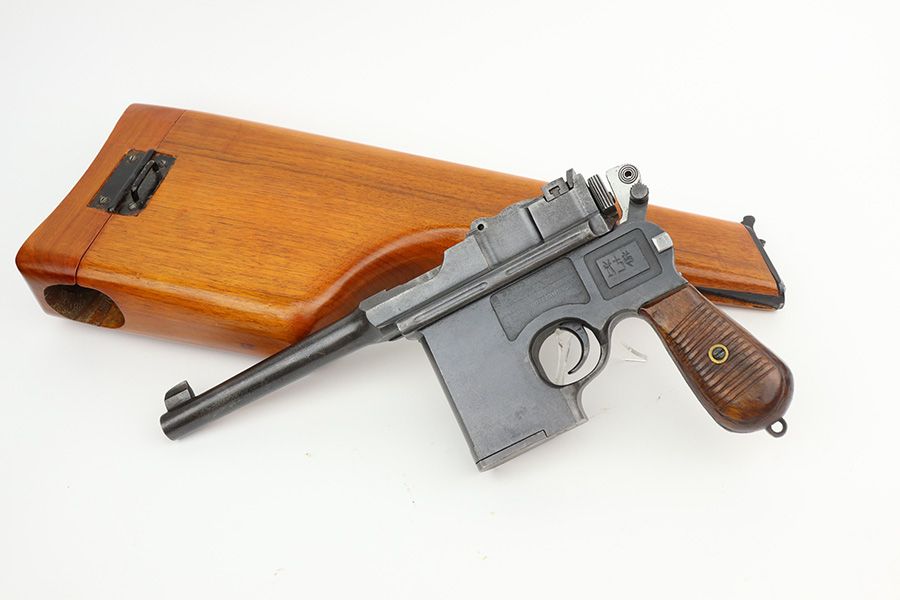 Add to Wish List Add to Compare
Description
8/17/21 - This is a rare and interesting Shanxi Type 17 rig as produced in the late 1980s as a copy of the ultra rare examples from the 1920s. From Forgotten Weapons, "The best known and most highly valued of the Warlord Era Chinese pistols is undoubtedly the .45 ACP copy of the C96 Mauser. These were made at the Taiyuan Arsenal in Shanxi Province between 1928 and 1931, with more than 8,000 made in total. They were the product of a proper Western-style production line, and Taiyuan Arsenal actually made standard C96 copies in 7.63mm Mauser before scaling up to the .45 ACP version. This change was made because the Arsenal was also making Thompson submachine guns, and it made sense to have caliber compatibility with their C96-style pistols. The result was a truly massive hand cannon, holding 10 rounds of ammunition in its fixed magazine, and fitted with an equally large combination shoulder stock and holster." This particular gun shows minor thinning to the finish throughout, with most of the wear along the barrel. Matching numbers throughout, including barrel, frame, trigger, hammer, etc. Strong, shiny bore. Comes with an unmarked stock, also a reproduction.
Details
We found other products you might like!