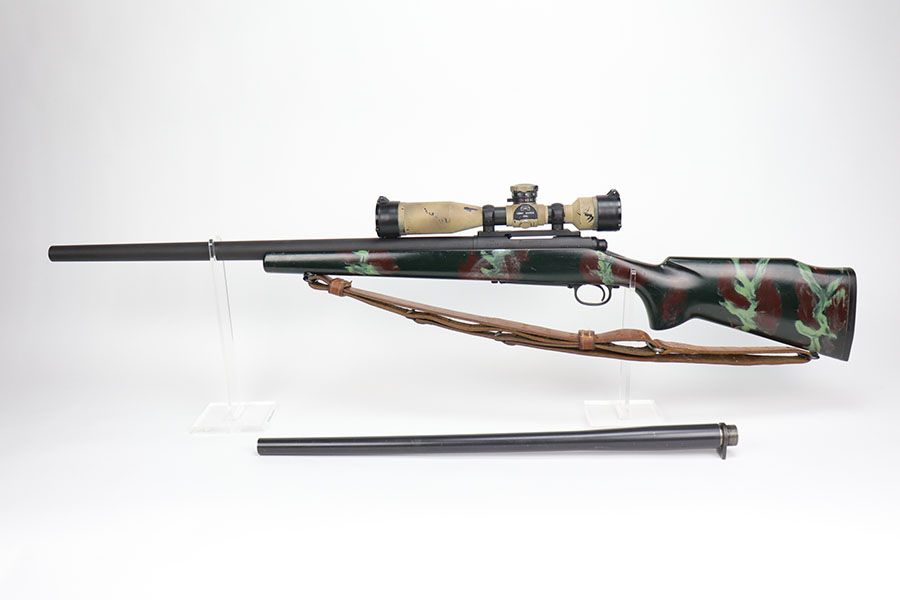 Add to Wish List Add to Compare
Description
10/16/20 - This is a rare and interesting M40A1 USMC "clone" sniper rifle, likely dating to the 1980s. It has the rare "smear", "finger painted" McMillan fiberglass stock. The original owner's family reports it was initially built by Seely Masker, a then extremely well-known custom rifle builder from New York who passed away in 1996. The gun comes with a Seely Masker marked and produced barrel in the M40A1 profile (same as the stock channel). The gun was later re-barreled with the correct USMC Gary Schneider made barrel in USMC M40A1 issued specs. The McMillan factory "smear" stock has Win70 bottom metal and a Win 70 trigger guard. The trigger guard appears to be "pre-64" style since it is the narrower guard. The Remington 700 receiver likely dates to late 1966 or early 1967. It has the "tombstone" style trigger group safety, as was used on the earlier USMC M40's from that era. The scope mount is a "two man attack" reproduction of the Unertl M40A1 mount. The gun comes with an original issued Unertl USMC 10X scope with the accompanying CMP certificate. Scope serial dates it to about june of 1983. Comes with spare Seely Masker .308 barrel. Minty bores on both barrels.
Details
We found other products you might like!