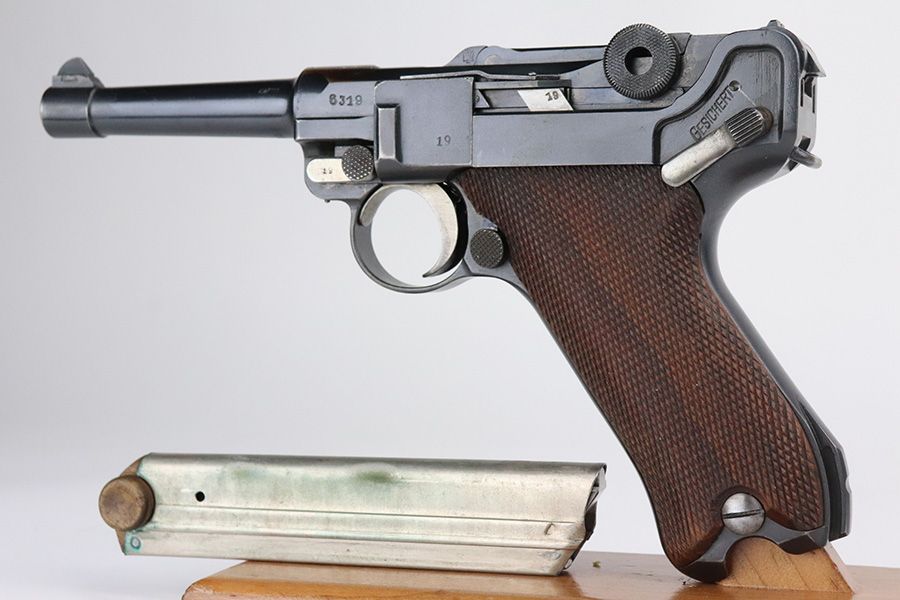 Add to Wish List Add to Compare
Description
7/30/21 - This is a very rare, and the most sought after of all early Nazi Sneak Luger pistol rigs. There have been several theories put forth as to the origins of these lugers with no real discernible explanation. In all there were three theories: 1) the "K.I." markings actually stood for "Kadet Institute", which was an early "SA" or "SS" officer's training school. That theory was discounted as no early training schools could be identified; 2) was that these were actually Concentration Camp Guard's pistols and that the "KI" is actually "K.L." and stands for "Konzentration Lager"; 3) the most recent theory, which seems to be the most plausible, is that the "K.I./1933" actually refers to some rework facility or factory responsible for rebuilding/overhauling left over WWI Lugers that were intended to be issued to early Reischeer Pioneer units or even early "Police or SS" units. The last theory could be plausible as all noted example have been from different manufacturers and have shown various rework proofs mark, mostly likely associated with the Simson & Co, who was responsible for reworking all Weimar era luger pistol from 1924-1930. This Luger started out as a DWM military example from WWI, then went to the German Police after the war (arsenal marking on front strap). It has the full mix of features, with commercial Crown/N proofs, police unit marking, military inspection stamps and police sear safety, as well the 'KI 1933' marking over the chamber. The finish is excellent with two areas of wear, one where the KI marking was applied and one on the bottom of the front strap. Mismatched WWI era magazine. Unmarked grips with no cracks. Excellent bore.
Details
We found other products you might like!