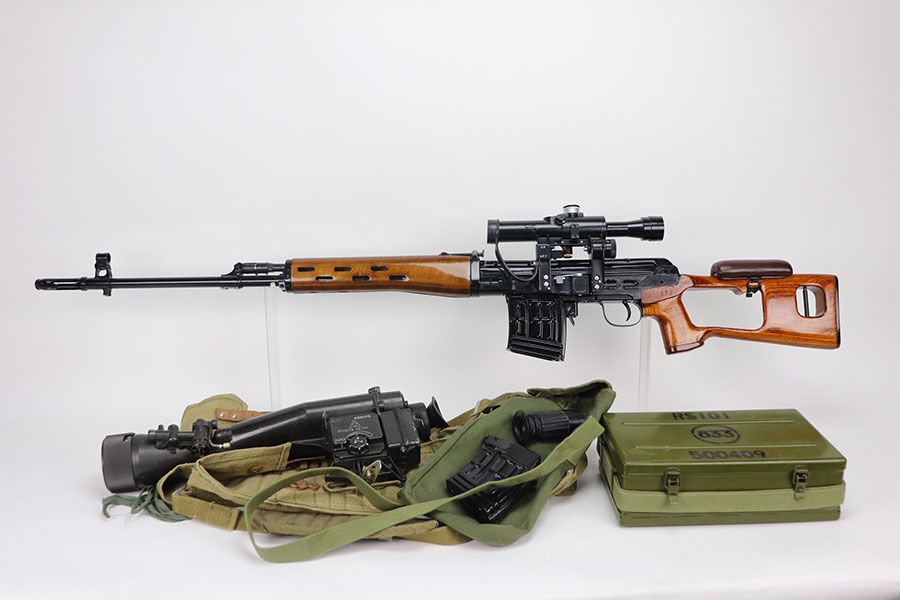 Add to Wish List Add to Compare
Description
4/29/21 - This is a scarce Chinese Norinco NDM-86 rifle imported by CJA of Springfield, Montana. It's all original and in terrific condition, with just a hint of wear behind the ejection port. There are two types of NDM-86 exported to the United States: EM351 and EM352, corresponding to two calibers 7.62 × 54R and 7.62 x 51 respectively. This is an EM351, which retains all the characteristics of a Chinese 79 sniper rifle which is reverse engineered from the captured Vietnamese Soviet SVD rifles. It is the closest resemblance to the original Russian/Soviet SVD rifle ever imported into the US. The rifle comes with the original scope carry case which has a spare magazine, cleaning/takedown tools, manual, lens eye cup, cleaning kit, etc. Also included with the listing is a rare Soviet NPSU (1Pn34) night vision scope. This is the first generation of the Soviet Union-developed night vision scope, it is also the NSPU series equipment number of the most widely used model. This scope in addition to the lens body, are in a canvas bag, and an infrared filter cover. The NSPU is a passive infrared sight that magnifies moonlight and starlight for brighter night vision. The NSPU scope features a Soviet standard side-mounted frame, so it can be mounted to Kalashnikov rifles, Dragunov sniper rifles (SVD). On the side of the frame is the word "NSPU" in Russian, which stands for "night firing and aiming equipment." A scythe, axe, red star sign in the middle indicates it was made in the Soviet Union and presumably the product of the 69th Instrument Design Factory in Krasnogorsk. There is an adjustment knob in the lower part of the center of the frame to adjust the brightness of the reticle. At the bottom is the locking lever that holds the scope to the mounting seat on the right side of the case. The sight is equipped with an IR filter and only IR can enter after installation. If the other party uses active infrared night vision equipment or has the engine that sends out the heat, the detection probability will be improved by this passive IR night vision.
Details
We found other products you might like!