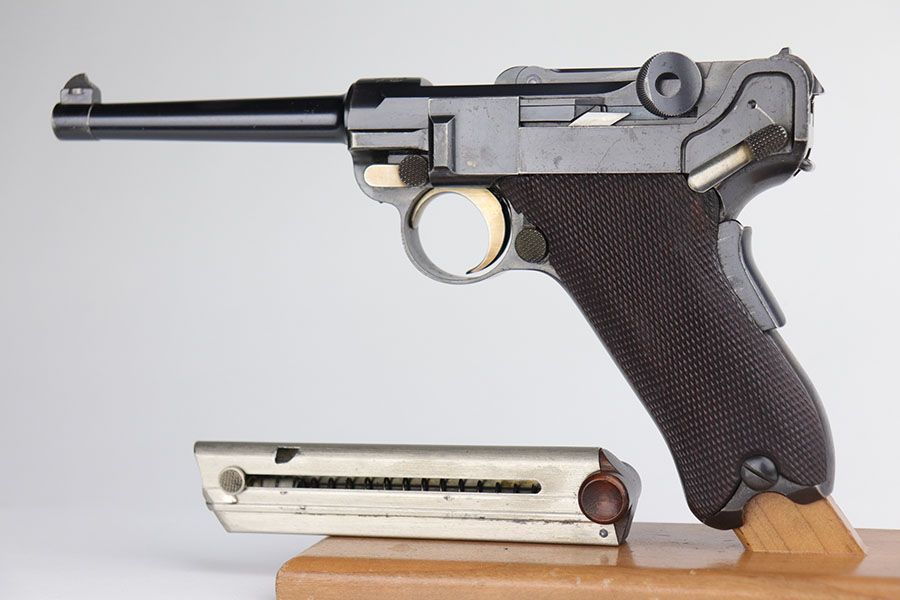 Add to Wish List Add to Compare
Description
8/25/20 - Here we have an extremely rare and correct American Eagle Army Test Luger produced by DWM. In April of 1901, the United States Board of Ordnance and Fortifications put in an order for 1,000 of these Lugers following test trials in which the model was fired 2,000 times under the harshest conditions possible. These Lugers feature the Great Seal over the chamber, which was not included upon request, but rather was found to be a great sales tool for the Swiss market by DWM following their initial sales of the same model but featuring the Swiss sunburst. The characteristics that separate these American Test Eagle Lugers from the other Model 1900 Lugers are the lack of proofs, the lack of a 'GERMANY' import stamp, and the last two digits of the serial number on the right end of the takedown Lever. This particular pistol features grips that are numbered and matching to the gun, and a wood-bottom magazine that is unmarked. The grips show minimal wear, just a minor chip under the safety. Bore is shiny with good rifling. The pistol has maybe 80% of the original blue, with most of the wear on the straps. As of the printing of Michael Reese's book on the subject, there was only about 100 of these known and identified in the accepted serial range (6099-7098)!
Details
We found other products you might like!