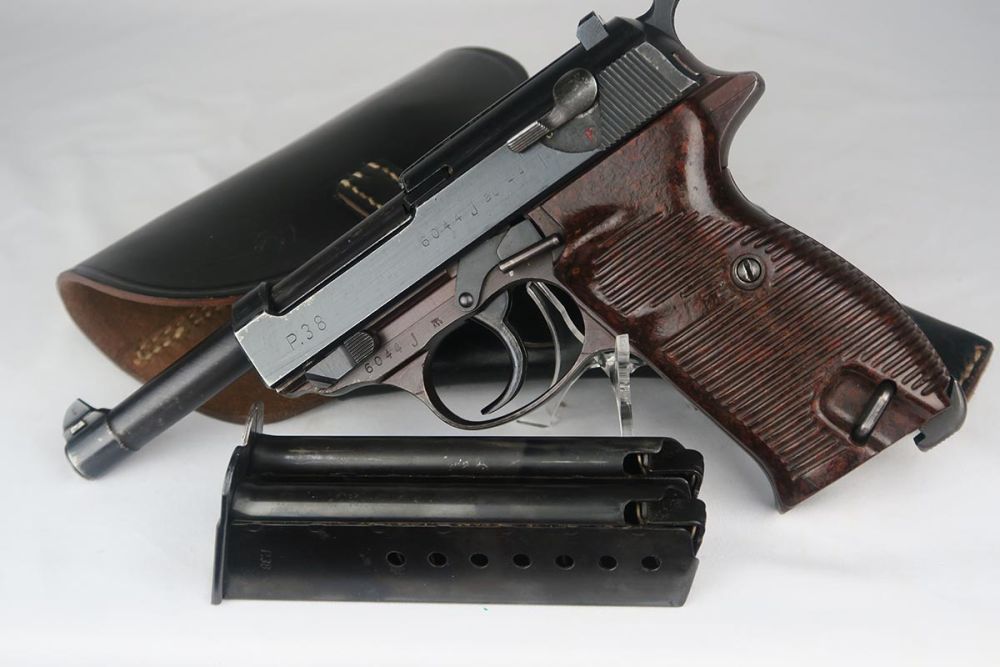 9/27/17 - This gun will become the "prize" of someone's collection.  The gun itself is a standard AC44 in the J block with a plumb color frame.  The condition is all original and matching numbers.  It comes with a 1944 holster in excellent condition as well as a spare magazine - Eagle/135 proofed (magazine in the gun is Eagle/359 proofed).  What makes this gun extremely unique and perhaps "one of a kind" is the documentation.  It was taken by Warren Easterling, Machinist Mate1st Class.  In a notarized letter that was signed by Easterling in 1999, it is described how he came to obtain this pistol from the U-boat and how he managed to sneak it off the boat.  He was an officer on he Halibut, which was a storied US Sub and the ensemble listed includes a book written by its captain - Admiral I.J. Galantin.  Easterling is briefly mentioned in the book and there are personal notes from the captain and the crew from when the book was published in 1987.  So the story of the Halibut is a very interesting read, but the incident of the sub capture is not mentioned.  Research may indicate the reason.   The Halibut was damaged in late 1944 and sent to Portsmouth NH for repairs. In May of 1945, six submariners (including Easterling) were sent out to accept the surrender of 2 U-boats - within days of each other.  It would appear that he participated in the surrender of U-805 and U-873.  Easterling states that the P.38 came from U-805.  But further research indicates that U-873 was boarded and "ransacked" for souvenirs including weapons.  In addition, the U-boat Captain, Fritz Steinhoff died in captivity. We have documents and photos from these events, but much more is available on the internet.  An interesting read for sure.  See one photo of the captain being escorted off his U-Boat with sailors carrying M-50 Reislings.   The other photo shows two launches pulling along side of one of the subs - as described by Easterling.  I read his account of the events and AFTER that found this material online which collaborates his account.   He even describes how he was able to sneak the gun off the U-boat. The only unresolved issue that I could see was whether it was U-805 or U-873.  Either way, it was captured from a Submarine in 1945.    How does one value such a unique gun?  If you look in the "Private Collection" section, you will see a 1934 Mauser that was taken from U-234.  It sold 2X in 2 years for $5,000 and then $6500.  I am also aware of an HSC taken from a U-boat that sold in the $10k range.