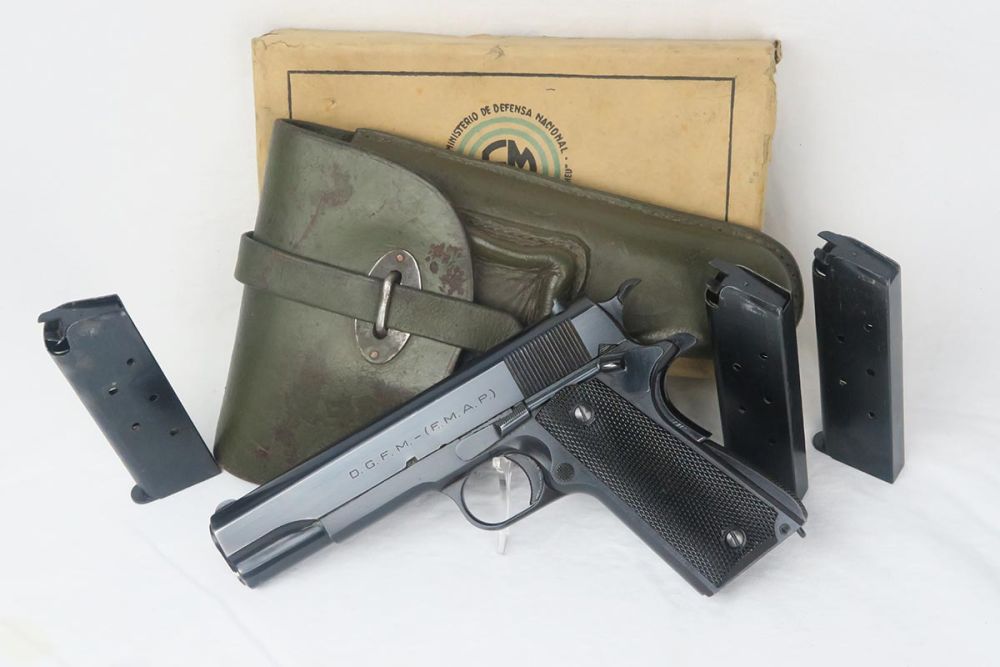 7/24/18 - This is a minty Argentine Sistema Colt 1927 in the original matching box and includes three matching magazines and an original holster.  High-polish blue on the pistol rates at 99% with minor edge thinning.  The holster and especially the box show age, with the box having softened over time (likely from gun oil).  All three magazines are numbered to the pistol and in similar condition to the gun.  Pistol has minty grips and bore.

In 1943, the Argentine Military Small Arms Factory (FMAP - Fabrica Militar de Armas Portatiles) began to prepare for the manufacture of Model 1927 pistols under the 1927 licensing agreement. These pistols were known as "Pistola Sistema "Colt" Modelo Argentino 1927, Calibre 11,25mm." Production began at the Esteban de Luca Arsenal in Buenos Aires, with the first pistols actually being assembled at the Domingo Matheu plant in Rosario, Argentina in 1945. The pistols were manufactured in accordance with Colt's 1927 drawings. They were exact copies of Colt's 1927 pistols (identical to US military M1911A1 pistols) except for very minor differences, and parts were interchangeable. The only noticeable differences were the markings, grips, black oxide bluing, a sharp edge on the rear of the hammer, and a sharp edge on the heel of the grip safety. Triggers were solid as on the 1927 Colts , and the checkering on the mainspring housing was changed from Colt type cut checkering to indented checkering.

The Sistema Colt pistols were made for the army, navy, air force, government bureaus, police organizations, and commercial sales. They were normally serial numbered on the right side of the receiver, the grip frame under the mainspring housing, on the top and right side of the slide, on the top of the chamber and the bottom of the magazine. The presence of an Argentine crest on the pistol indicates government issue; pistols without crests were made for local police, non-government agencies, commercial sales and export. All Sistema Colt pistols bear the marking D.G.F.M. - (F.M.A.P.) on the left side of the slide, which indicates manufacture by the Direccion General de Fabricaciones Militares at the Fabrica Militar de Armas Portatiles. A total of 88,494 Sistema Colt pistols were produced.