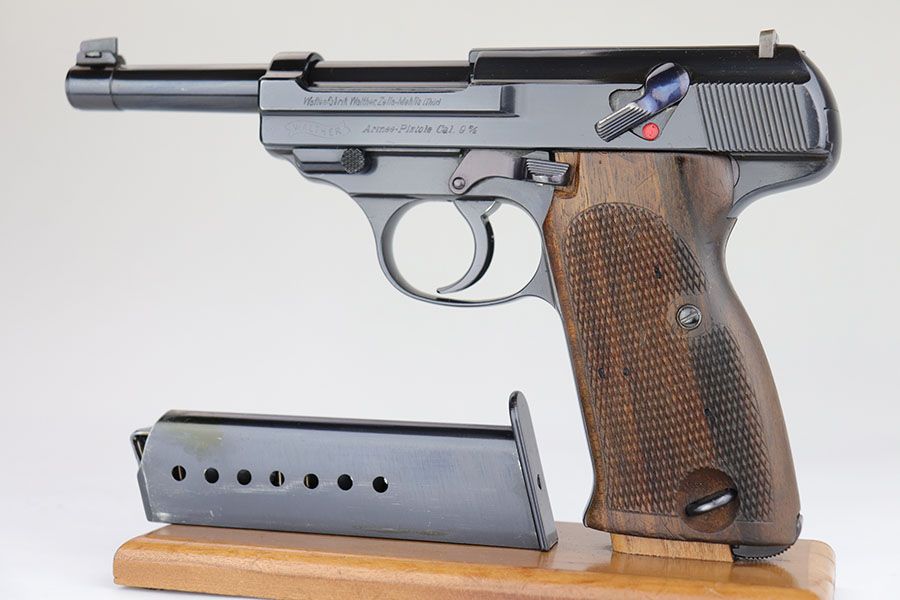 Add to Wish List Add to Compare
Description
3/11/20 - This is an extremely scarce example of a second developmental stage Walther Model AP (Armee-Pistole) prototype pistol that includes its original matching factory magazine and grips. This series was actually manufactured in two serial number ranges. The first group was a continuation of the early Walther Model MPs in the 1000 serial number range and this second group used the zero-prefix serial numbers with this specific pistol being serial number "044". This was Walther's continuing attempts at developing a suitable semi-automatic pistol for military sales for the German Army. This example like the early series exhibited the "concealed hammer" design, however it was not designed for a shoulder stock of any type. There were no two alike as Walther continued to experiment to determine which was the best design for the German military. They are still considered an early engineering design/development model, that incorporated several unique and innovative features such as the standard swinging locking block, twin recoil springs on the frame, standard 4 7/8 inch barrel, with the two separate takedown and slide release levers, with the takedown lever still having the larger checkered head. Most of these features were later incorporated into standard Walther HP and P38 production pistols. The slide still retains the unique single reinforcing rib on each side and the concealed internal hammer, characteristic of the earlier "Mod AP" pistols. It is estimated that these early prototypes were produced circa 1932-34 time frame with an estimate of approximately 75-100 produced with less than 20 known today. This example has an all steel frame with the longer rear frame area (below the slide serrations), however as noted it is not machined for a shoulder stock. This example has the original Walther factory wraparound two-piece grips that have the full checkered panels on each side with a lanyard loop on the lower left side, and they are numbered to the pistol. There is limited original factory information on this specific design for obvious reasons; however, there are two excellent reference books that provide historical, factual information on this model. The first is "Walther Vol. III, 1908-1980", by Rankin on pp. 72-73 and the second is "The P38 Pistol" by Buxton, Vol I, pp. 31-33, and pp. 48-67. This Walther Mod. AP is an extremely scarce and important pistol in the overall design and development of the Walther P.38.
Details
We found other products you might like!