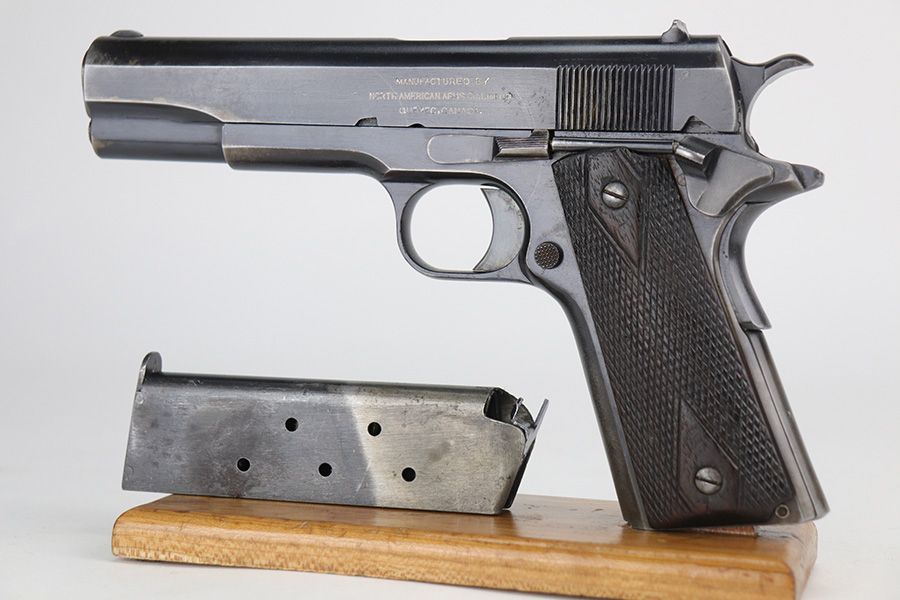 Add to Wish List Add to Compare
Description
10/28/21 - Here is a very exciting find and a Legacy first! This is an original North American Arms Co M1911, the first we’ve ever encountered, let alone handled! These are the rarest of all military contract 1911s, with only ~100 such pistols ever completed. This one also happens to be one of the lowest serial numbers we could find, lucky #9! Only serials #1 and #4 have been reported as lower numbered examples. In 1918, the U.S. government initially placed an order for 500,000 of these to be made by North American Arms Co. of Quebec, but they didn’t have the manufacturing or materials to even get the project off the ground. All completed examples were done so after the war, either as tool room examples or assembled from the parts on hand. A few distinct features include the uncheckered hammer, unmarked barrels, mainspring housing without lanyard ring, flaking of the finish and location of the serial numbers. The finish is original throughout but does show notable thinning on front strap and mainspring housing, as well as patches of bluing loss on the slide edges, underside of slide and middle right side of slide. This particular pistol does appear to be one of the nicest we could find ever marketed/offered for public sale. The two nicer examples sold for $175k and $218k! The grips show some age but no cracks or chips. Barrel is correctly unmarked throughout, and some additional features that are specific only to the North American Arms examples are detailed in the last photo of this listing. Bore is nice and clean with strong rifling. Two-tone magazine.
Details
We found other products you might like!