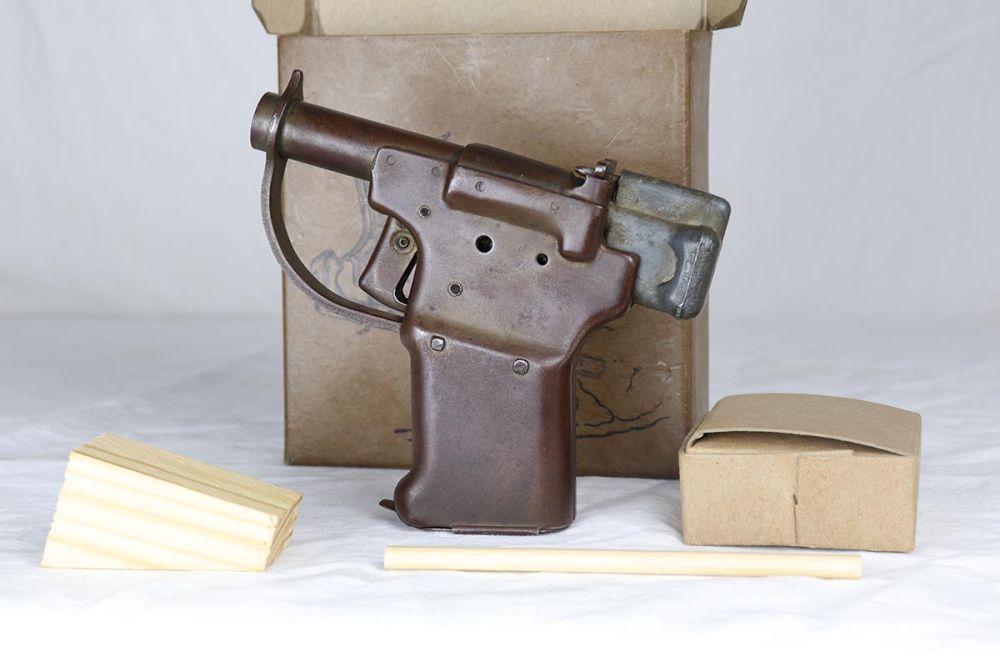 6/29/18 - The FP-45 Liberator was a pistol manufactured by the United States military during World War II for use by resistance forces in occupied territories. It was originally intended as an insurgency weapon to be mass dropped behind enemy lines to resistance fighters in occupied territory. A resistance fighter was to recover the weapon, sneak up on an Axis occupier, kill or incapacitate him, and retrieve his weapons. The pistol had its origins in the US Army Joint Psychological Committee and was designed for the United States Army in 1942 by the Inland Guide Lamp Manufacturing Division of the General Motors Corporation in Dayton, Ohio. The army designated the weapon the Flare Projector Caliber .45 hence the designation FP-45. This was done to disguise the fact that a pistol was being mass produced. The Liberator was shipped in a cardboard box with 10 rounds of .45 ACP ammunition, a wooden dowel to remove the empty cartridge case, and an instruction sheet in comic strip form showing how to load and fire the weapon. This one is in good condition with all original parts, but it does show patina to the finish throughout.  It comes with an original capture document, that was issued to W.B. Nelson and signed by LT L.J. Wiggins.  It is not serialized to the pistol, given the pistol has no serial number, but does appear to be an original document from World War II.  The pistol comes with a reproduction box, dowel and set of instructions, but it does have 10 rounds of .45 ammo.