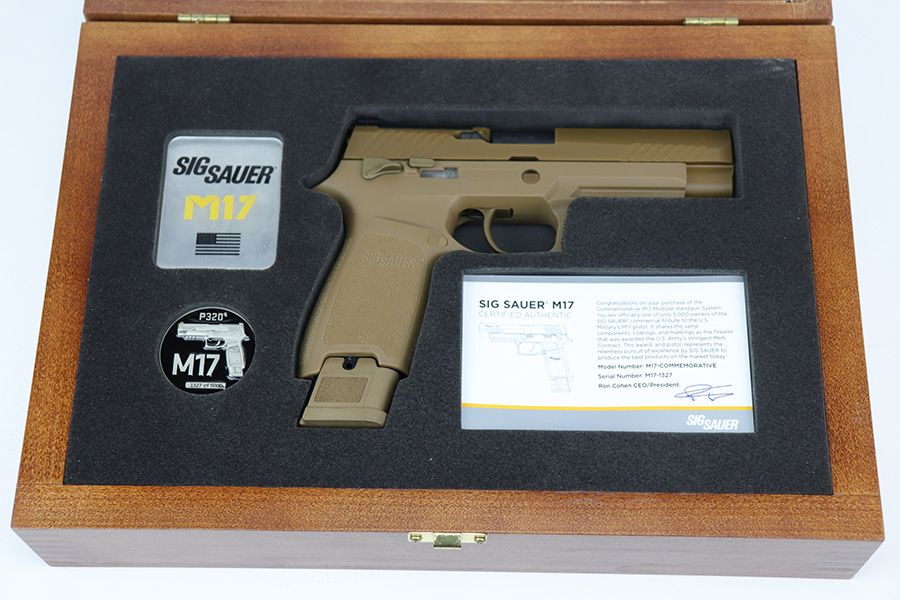 Add to Wish List Add to Compare
Description
10/13/21 - This is a minty Sig Sauer P320 M17 commemorative in its original, matching box, along with the Sig Sauer glass/wood display case. From Sig's site: "The Sig Sauer Commemorative P320 M17 is 1 of 5,000, and is a commercial tribute to the U.S. Military's M17 pistol. It shares the same components, coatings, and markings as the firearm that was awarded the U.S. Army's stringent MHS Contract. This award, and pistol represents the relentless pursuit of excellence by Sig Sauer to produce the best products on the market today. Only 5,000 M17-Commemorative Edition pistols have been produced for sale, and each SIG SAUER M17-Commemorative pistol is serialized M17-0001 through M17-5000 and includes the Army’s required unique identifier (UID). The M17 is sold in the same cardboard packaging as delivered to the U.S. Army. From the pistol to the packaging, the M17-Commemorative Edition is identical to the U.S. Army’s official M17 service pistol. The pistol features a coyote-tan PVD coated stainless steel slide with the same optic cut as specified by the MHS contract, coyote-tan colored controls just like the original pistols shipped to the 101st Airborne, and a manual safety. The M17 is equipped with a SIGLITE front night sight and removable Night Sight rear plate. The M17-Commemorative comes with a coyote-tan carry-length grip module. Upon registration of the M17-Commemorative pistol, the purchaser will receive an official certificate of authenticity and commemorative challenge coin, both with serial numbers matching the purchased M17-Commemorative pistol." The cardboard box still has the lock, two spare magazines and the manual. FFL required.
Details
We found other products you might like!