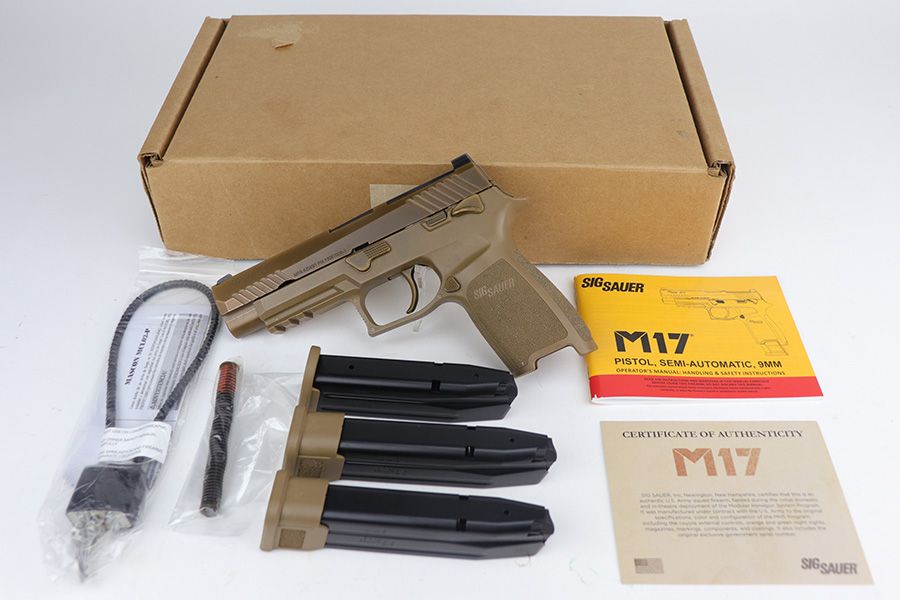 Add to Wish List Add to Compare
Description
10/19/21 - This is an interesting and authentic U.S. Army issued Sig Sauer M17 pistol, with certificate of authenticity from Sig Sauer. This particular example is accompanied by a FOIA request by a previous owner, which indicates it was sent to the 101st Combat Aviation Brigade, 96th Combat Support Battalion Company B Rear Detachment. The FOIA document highlights every stop along the way for this pistol, from initial manufacture to its return to Sig Sauer years later. From the COA, "This pistol was fielded during the initial domestic and in-theatre deployment of the Modular Handgun System Program. It was manufactured under contract with the U.S. Army to the original specifications, color and configuration of the MHS Program, including the coyote external controls, orange and green night sights, magazines, markings, components and coatings. It also includes the original exclusive government serial number." The gun itself shows minor signs of handling wear, and some wear along the top of slide and ejection port indicate it was fired some. Bore does not show it though, as it's clean and has a mirror shine. It comes in the matching surplus box with two spare magazines, manual and gun lock. FFL required.
Details
We found other products you might like!