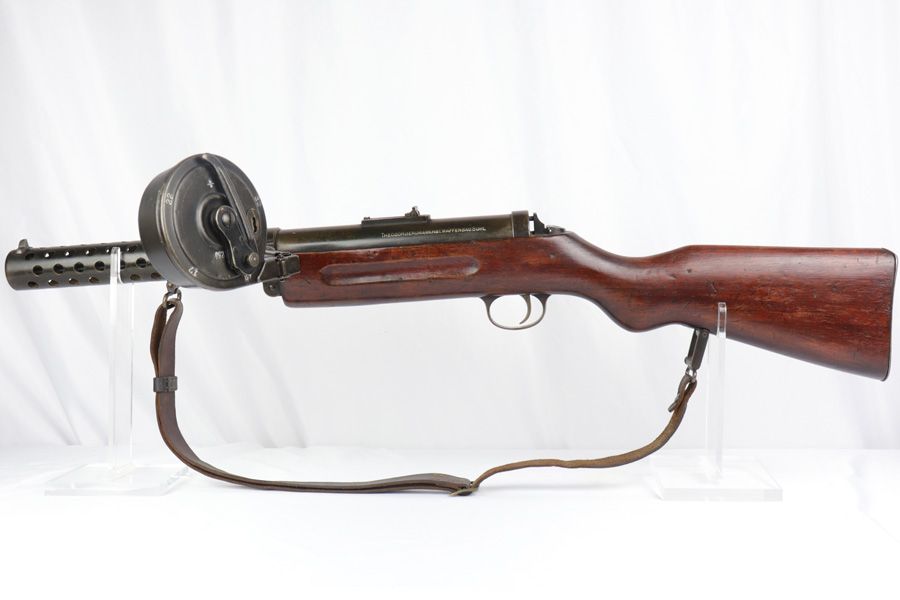 Add to Wish List Add to Compare
Description
11/9/18 - This is a very nice example of a late WWI/early Weimar era M.P.18 I submachine gun as manufactured by the Theodor Bergman factory. The model was originally designed by Hugh Schmeisser in 1917 and first appeared in early 1918. This was a blow-back type operated weapon firing the standard 9 mm Luger cartridge. It has a heavy tubular receiver and barrel jacket with a heavy round bolt with a fixed firing pin. The various parts and assemblies were all subcontracted out to smaller companies, with the Bergman factory doing the final assembly and testing. The top of the receiver it stamped: "M.P.18,I./1920/Crown C/14157". The receiver and barrel jacket are fitted with a fixed blade front sight with a 2 position (200 and 300 meters) rear sight. They are fitted with a one-piece walnut stock with finger grooves on the sides with a flat stamped steel buttplate. It has all matching serial numbers on all visible parts, including barrel, receiver, bolt handle, trigger assembly and even the grip screws. After WWI they were considered as a significant war item as they were specifically banned/restricted under the Treaty of Versailles. Only the German Police, organized under the Weimar Government were allowed to have these weapons, so all of them are stamped with the "1920" date indicating that they were accounted for under the noted treaty. This one also features a clear Weimar era proof on the stock. They have an angled magazine well which made them somewhat unbalanced, but that allowed them to use the standard German 32 round Artillery luger snail drum magazine as shown here. This SMG comes with one original luger snail drum magazine. The finish on the gun is all original and rates at 70-80% with uniform browning to the metal parts. Stock shows basic handling wear and small dings but no major cracks or chips, and has a nice cherry color to it. Terrific bore. Fully transferrable on form 3 or 4, and C&R eligible.
Details
We found other products you might like!