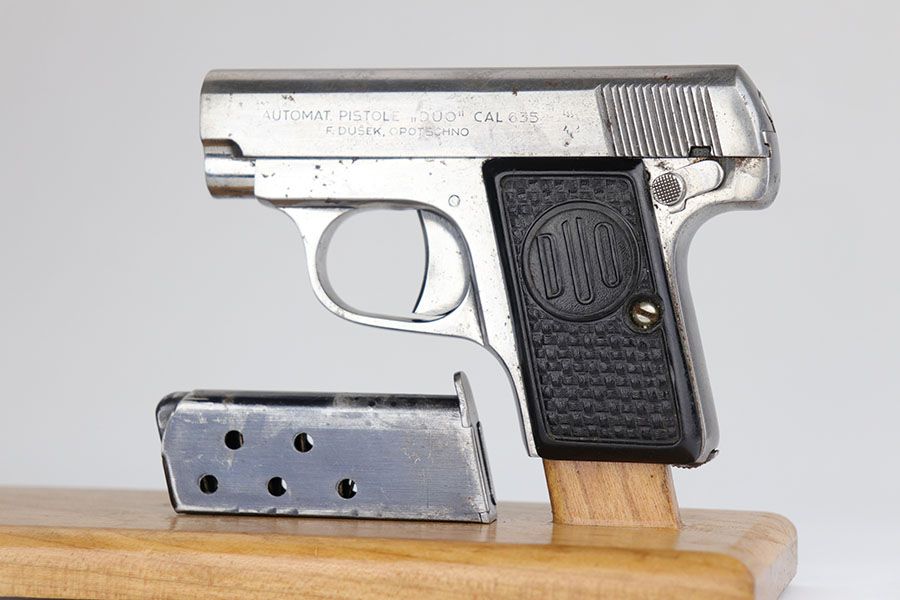 4/10/20 - This is a very interesting Czech Duo that has a rich history, with accompanying documentation of its story. The pistol was made in 1942 at the F. Dusek factory in Opocno, Bohemia. We originally thought this gun had been re-nickeled but after further inspection, believe that someone has deliberately put the gun 'in the white' and removed the bluing. Original grips are present and in good condition. Bore has good rifling but some frost and freckling. The pistol is accompanied by signed account of son-in-law of Ssgt. Michael Kovalick, who brought the pistol back. The story provides details about how Kovalick came to obtain the pistol while serving as an O.S.S. agent behind German lines in Yugoslavia. Also includes a photo of Kovalick during the war.

The name 'DUO' comes from the combination of Dusek and Opocno, which is the last name of the original manufacturer and the city he gunsmithed in.  Dusek’s first pistols bore the name Singer, and later Ydeal. However, by 1938, he was using the name DUO.  When Dusek refused to coöperate with the Nazis during World War II, they took over his factory and proceded to produce over 110,000 DUO pistols.  The DUO was also very popular with the Germans and was sold to the public at large through various sporting goods stores.  From the first, Dusek’s pistols were very well made. His production standards were higher than those of the Spanish manufacturers whose pistols he imported, and his pistols were more expensive as well.  The DUO is a single action pistol virtually identical to the original Browning-designed Colt .25 hammerless vest pocket model.