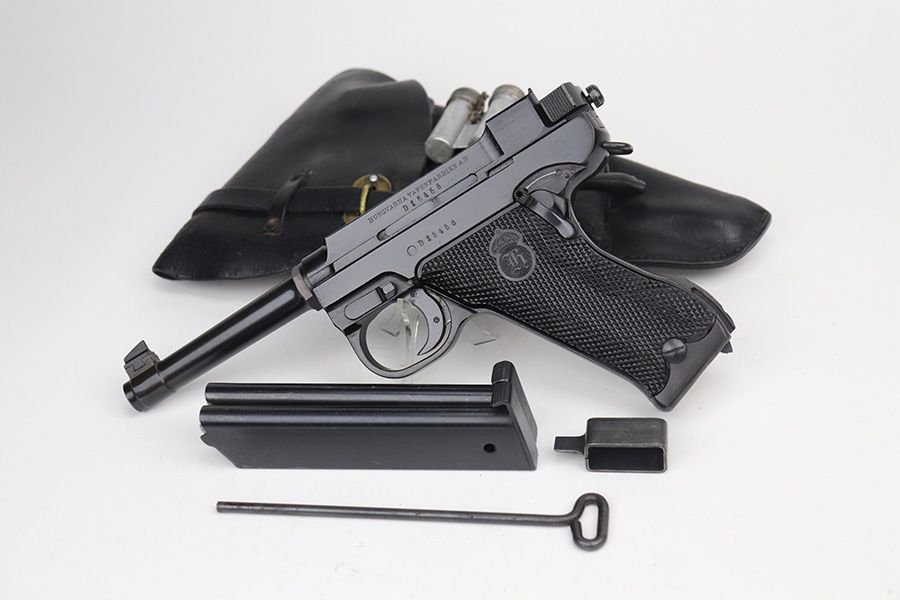 Add to Wish List Add to Compare
Description
11/4/21 - This is a minty Husqvarna M40 pistol rig with holster, two magazines, cleaning rod, lanyard, oilers and loading tool. This is a Swedish made copy of the Lahtl L-35, and this particular pistol was part of the Danish military contract that ran from 1944-1947. The Swedish army realized there would be a shortage of pistols in the event of large scale military mobilization in Europe. Originally adopting the Walther P38 in 1939, Germany's entry into World War II stopped the export of P38s to Sweden. To compensate, Sweden adopted the Lahti pistol but was unable to import L-35-type guns because of Finland's conflicts with the USSR. Production was licensed to Svenska Automatvapen AB but the immediate collapse of the company passed the contract to Husqvarna Vapenfabriks Aktiebolag. The first m/40s were delivered to the Swedish military by 1942 with slight differences from the Finnish L-35 Lahtis. The grips of the m/40 have the Husqvarna "crown H" motif engraved and the front sight was slightly larger. The barrel is also slightly longer on the m/40 than the Finnish Lahti with the m/40's trigger guard being heavier, and the pistol does not have the loaded chamber indicator and lock-retaining spring of the Finnish Lahti. The finish on this one rates at 99+%. There is nearly zero bluing loss, but a little oxidation on the grip frame. Excellent grips and bore. No import mark. Holster shows age and handling, as well as some cracking on the pouches.
Details
We found other products you might like!