Description
8/3/20 - This is a rare and complete Modified 1902 Nambu or "Papa" Nambu rig, with spare magazine and rare holster variation. There were only about 9,000 Papa's ever produced. The pistol has all matching numbers, including the left grip panel. The right grip panel also appears numbered and matching, but it's faint and a couple of the numbers aren't clearly visible. The bluing on the pistol rates at 95% or so as there isn't much finish loss, most notably a spot of wear on the trigger guard. There is some pitting in a few areas though (grip safety, front of frame, left side rail, frame under grips). There's also some oxidation on the back strap. Rig includes a total of two of the rare, original magazines but neither match the number on the pistol. Terrific bore and the grips are in excellent condition. The rig is completed by a super rare holster variation, which can be viewed in Derby & Brown's book on Japanese Military Cartridge Handguns (pg. 74). It's in great shape overall but it's possible the rear belt loop was replaced at some point based off the difference in color.
Details
We found other products you might like! 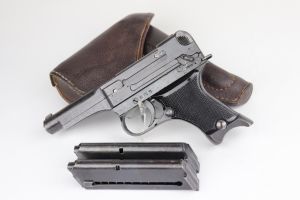 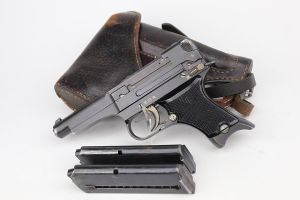 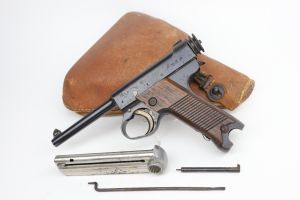