Add to Wish List Add to Compare
Description
6/18/21 - Developed relatively late in World War II, the MP44 was a very important milestone in military weaponry, being the namesake of an entire class of weapons, the intermediate caliber, select fire, infantry "assault rifle". Influenced by the situation on both fronts, the MP44 made heavy use of stamped components, limiting costly and labor intensive machined or forged components to critical areas and speeding production. The adoption of an intermediate power cartridge allowed each trooper to haul more rounds in their combat loads, and kept the recoil manageable in a relatively lightweight arm. While the full power "battle rifle" would be the western standard for the start of the Cold War, the MP44's spiritual children gained more traction in the 60s and 70s, and still hold a place as the de-facto standard for infantry weapons. Blade front and tangent notch rear sights, with "MP44" and "9215/44" on the left side of the receiver, the "bnz" code on the underside, and the full or partial number repeated on the trigger housing and bolt carrier. A scope rail has been welded to the right side of the receiver, with a cast metal scope base (renumbered to match) and a ddx-code ZF4 scope, fitted with a rubberized canvas eyepiece and an extended body. The buttstock is laminated, with a brown leather sling and a trapdoor compartment. One extra magazine is included, along with a six-cell, two pouch magazine carrier. Constructed from tan canvas with leather straps and ersatz material reinforcement in the pouch flaps, the loops are marked "StG44" and "ojx45". A HBT cloth strap has been added, allowing the set to be transported together or hung somewhere "saddlebag" style. The finish on the rifle is excellent overall, minor edge wear here or there but in great shape overall. Bore is shiny with strong rifling, just a bit of frost in the grooves. Fully transferable.
Details
We found other products you might like! 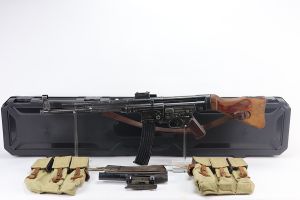 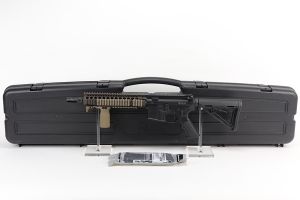 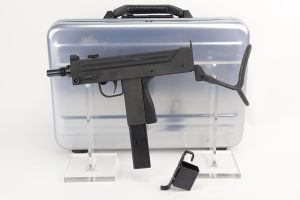